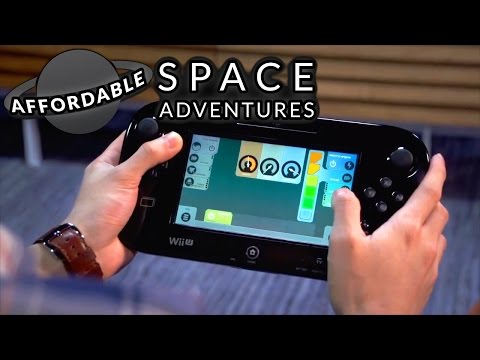 Eugene here from gamerparent.net, tried out Affordable Space Adventures together with his kids!

Affordable Space Adventures is a Wii U exclusive game from Knapnok Games and Nicklas aka “Nifflas” Nygren. The object of the game is to pilot your rudimentary, cheap, bucket of bolts, ahem, “affordable” space craft through a series of atmospheric and stealthy, sidescrolling levels. It reminded me a bit of the old arcade game “Defender”, but slowed way down, and with puzzles added to it.

While you can play the game on your own, it’s definitely much more interesting playing as a team. And you are definitely a team. The ability to work together will be an asset in the success of your mission.

The Engineer has the most complex role, using the GamePad screen to monitor and adjust the engine systems, boosting the thrust or the stabilizer, or adjusting the angle of the ship by rotating the GamePad.

The Science Officer is called upon to help the team see and scan what dangers might be lurking outside. Sometimes the environments can be absolutely pitch black, and all you have to go by is the small light from the scanner.

The Pilot’s role is to, well, pilot the ship through the levels. At the start it’s not difficult, but later stages are much more tricky.

The game progressively adds more systems to the roles as you go further through the stages. The engineer starts with only one engine, but later will have to contend with two kinds of engines, and also managing heat, electrical, and sound levels to avoid detection. The Science officer will not only have to shine the light, but also shoot flares, or scan enemies to determine their detection range, and much more.

The atmosphere of the game is really outstanding. It’s spooky and it can be tense, not knowing what’s out there. Or possibly worse, when you do know what’s out there, and are trying to avoid them. Using the GamePad really reminded me of Star Trek, with me down in Engineering, adjusting thrusters and antigravity stabilizers.

Because the game is a sidescrolling game, and because it doesn’t require quick reactions but more methodical and thoughtful problem solving, it’s well suited for team play. This is not a twin stick shooter, nor is it a flying game. Affordable Space Adventures is most similar to something like Artemis: Spaceship Bridge Simulator, but is more pared down to the core mechanics.

As you can imagine, dividing the responsibility between three people requires clear communication if you are to succeed.

The kids really got into their different roles, and although sometimes we were frustrated with each other, we began to understand the limitations of each others roles. The pilot can only hold the ship if I, the engineer, could enable the stability controls. And the science officer needs the ship to be steady in order to successfully hit the target with her flare. We are all dependent on one another, and when we stop to think about it, patience and teamwork are the keys to getting through. But it is amusing to see yourself crash in flames from time to time.

Thankfully, the game has a wonderful sense of humour, and the juxtaposition of company advertising and a funny spacecraft user manual with a dark and dangerous environment is a perfect pairing.

The game has nearly 40 levels, and we definitely enjoyed the first quarter of the game. The levels start to get more complicated as the enemy types and number of enemies increases. The game offers two difficulty modes, a Tourist mode and a more Experienced mode.

Affordable Space Adventures is a unique experience that you can only find on the Wii U, and it utilizes the system in a thoughtful and creative way. It’s great to see what small developers are doing with the system, and I hope that more games like this come out in the future.