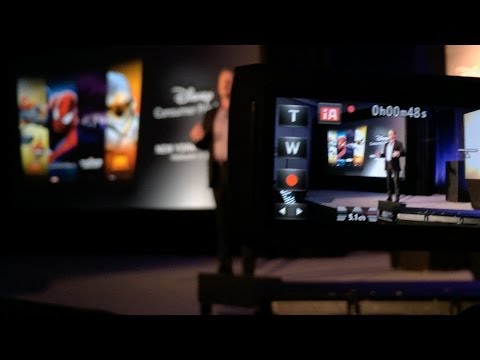 Full Disney Consumer Products presentation from New York Toy Fair, except the trailers I wasn’t allowed to include (which will follow soon), and including the after party toys.

As last year, the event was once hosted by Jim Babcock, director of Internal Communications at Walt Disney with a brief visit from executive VP of global licensing Josh Silverman (who I had an in-depth interview with afterwards).

The Amazing Spider-Man 2
After the trailer aired (as seen at RoboCop screenings) Babcock showed off Electro’s action figure from Mattel. He was joined in dramatic style by a child dressed as Spider-Man carrying the Web-Slinging Spider-Man toy which then shot Babcock with silly string.

Taking his mask off, the child was revealed to be Jorge Vega who appears in the movie, and we discovered, gets to fight Rhino with Spider-Man. He was then joined on stage by Andrew Garfield who made an interesting (if slightly awkward, and I imagine off script) joke about even Hitler being an innocent baby once — which was saved by the quick thinking Babcock who quipped “I love that movie”.

Guardians of the Galaxy
After showing the video (a “sizzle reel” with comment from Marvel Studios Prez Kevin Feige, Chris Pratt, James Gunn) they brought out the related toys. Here more of Hasbro’s handywork in the form of a Star-Lord’s Quad Blaster and the electronic talking Star-Lord figure.

Star Wars Rebels
Having bought Lucasfilm, this is the first new Disney XD cartoon from them which comes out in the Autumn. Here Babcock was cut off mid flow as the “Star Wars” theme was played to announce the arrival of Jedi Kanan. (closely followed by two Imperial Stormtroopers).

Freddie Prinze Junior talked about his audition or voicing Jedi Kanan and revealed that they were about halfway through filming the first season. He alluded to other well known talent being in the show, but wasn’t able to say more.