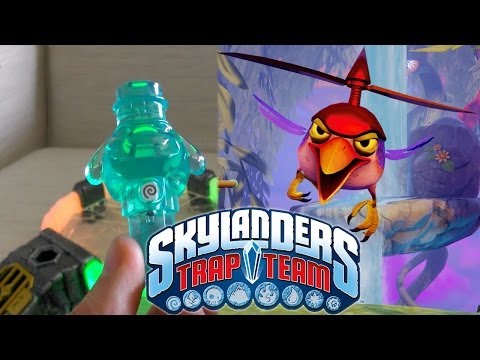 This is my exclusive reveal of a new Skylanders Trap Team villain Buzzer Beak and his related Air Trap.

As you can see, he appears to be inspired from a variety of different animals, with the beak of a toucan and the legs of a chicken. This wildfowl side to the trap-able villain reminds us of Free Ranger from Swap Force, and with good reason because they both share the same element: Air.

The villains function in Trap Team as a second set of collectable characters. Unlike the Skylanders though they don’t have a physical figure (which is a bit of a shame when they look as good as Buzzer Beak) but are instead collected in the game provided you have the right trap. Additionally, certain traps will come pre-loaded with special edition villains.

With E3 opening its doors on Tuesday expect a number of other Villains to join the ranks of Buzzer Beak, Wolfgang, Chompy Mage and Shrednaught. There will be over 40 villains to catch in the game each can be upgraded by finding special items in the game.

We do not grant permission to use this footage on other channels.