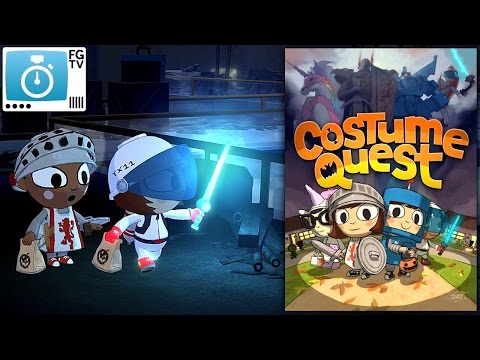 Here’s our 2 minute guide for Costume Quest from Ryan, dad of two. From what’s great about the game to what to watch out for, here’s everything parents need to know:

1. Genre and story:
Costume Quest is a Halloween adventure from Double Fine Productions. In this charming role-playing game, choose your hero and trick-or-treat through a fantastical adventure. Complete quests, build your party, and collect costumes along the way that allow you to transform into powerful champions and take down the evil Repugians. It’s a heroic holiday tale to capture the imaginations of kids and kids-at-heart.

Along with the cartoon visuals and mature writing, one of the biggest draws is the costumes, everything from suspicious-looking clowns to bus throwing superheroes –each looks and functions differently in combat. Outside of combat the costumes are used to solves puzzles by using unique abilities to either advance in the story or get that last piece of a costume recipe.

2. Developer:
Costume Quest was developed by Double Fine in 2010. The game was an idea proposed in their yearly competition Amnesia Fortnight.

3. Format:
Costume Quest is currently available for PS3,Xbox 360 and PC . It’s currently unknown if the game will appear on PS4/Xbox One .

It should be noted that Costume Quest has downloadable content called Grubbins On Ice which comes free with the PC version but will cost £3.39 for both PS3 and Xbox 360. It’s also currently not available to purchase a psychical boxed copy of the game at this moment of time.

5. Length:
Costume Quest can be completed within six to eight hours for average competent players, but can take up to 10 hours or more to do everything the game has to offer.

6. PEGI/ESRB rating:
PEGI (http://www.pegi.info/en/index/) rates Costume Quest as only appropriate for those who are 7 or older, with content descriptors for “Non realistic Violence towards fantasy characters and pictures or sound may be scary to young children.”

The ESRB (http://www.esrb.org/ratings/synopsis….) gives Costume Quest a rating of E for Everyone 10+, with content descriptors for Cartoon Violence, and Tobacco Reference. The description goes into detail about combat system., e.g. “Combat is controlled by pressing button sequences corresponding to on-screen prompts.” and points out that combat is accompanied by “sound effects associated with battle are realistic at times”. There is also brief joke about smoking (e.g., ‘Oh, why did I have to pick today to quit smoking?’).

9. Themes:
Costume Quest is set in a happy go lucky sub-urban area, but soon one of the children you play is kidnapped sending you on a magical adventure to save your sibling from the evil grasp of Dorsilla.

Much of the game is played at night as the children aim to foil their kidnappers, players who are sensitive abandonment themes may find it unsettling.

Opening doors can result in jump scares as cartoon monsters suddenly appear and attempt to steal your collected candy.
Being set in halloween means there are witches, monsters and magical costumes that may grate with those not comfortable with these themes.

10. Why people play:
Players of all ages will be drawn to Costume Quest’s perfect depiction of halloween fun. However it’s the fluid exploration and rock-paper-stone style combat that will draw them in for the duration. Add in an endearing plot about sibling love and the magic of monsters and you have a recipe for hours of enjoyment.