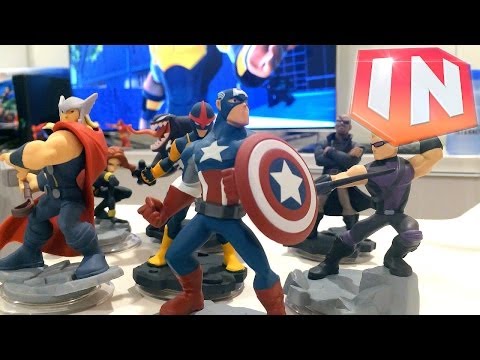 Join us for the first of our series of Disney Infinity play throughs. We are starting with the first 15 minutes of The Avengers play set.

As you can see there are plenty of new play-mechanics to match the new franchise. The game feels generally bigger, and so it should with worlds offering substantially more play-space than last time.

It’s the figures though that really shine though. Sculpted with obvious care and attention the two Marvel play sets manage to walk the line of looking distinct but part of the same set. Hitting The Avengers play set first it was interesting to see a more character class driven play scheme than last year.

Different Marvel characters offered either ranged, brawling or combination specialities. However this is just the starting point as each time you level-up your character a new skill and ability can be added from the expansive tech tree. This takes the seed of the idea of The Incredibles play set’s upgrades and writes them large through the whole experience.

Older characters from the original game will also benefit from the increased level cap as well and the related performance increase. They can be used in the toy box mode (that has also been enhanced and we will look at later), but still can’t be combined across different franchise play sets.

However there are certain Marvel characters that can be used in either The Avengers or Spider-Man, for the first time crossing over from one set to another. This, of course, makes sense with various Marvel characters turning up in different story-lines. To do this you first need to unlock the ability in the target play set but then you can bring in Ironman into the Spider-Man play set and Nova into The Avengers play set.

We also have a set of Skylanders Trap Team let’s play videos too, all the new figures from E3.