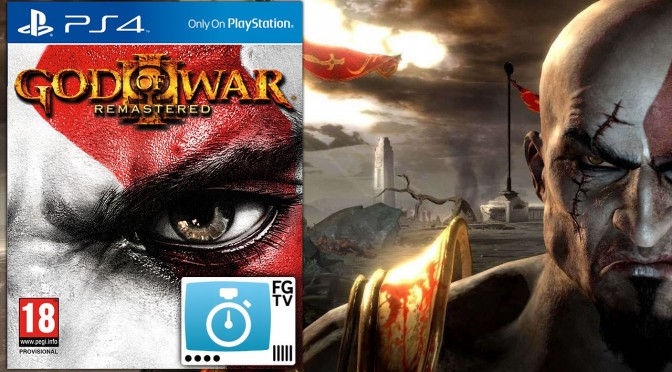 Parent’s guide to God of War 3 Remastered on PS4.

God of War III Remastered is a remade PS4 version of the PS3 game God of War III, released ten years after the original game in the series, God of War on PS2.

The God of War games are action-adventures based in Greek mythology where you fight mythical enemies with powerful attacks, some of which are magical. Combat is based on combos and quick-time events, with different weapons that you acquire through the game. There are also platforming and puzzle elements.

Other action-adventure games with similar combat include the Devil May Cry and Prince of Persia series.

In God of War III Remastered, you play as Kratos, the former God of War. Kratos wants to climb Mount Olympus to destroy the Olympian gods and also to find Pandora so he can open Pandora’s Box. Throughout the game he encounters many mythical antagonists.

As with previous God of War games, God of War III was developed by Sony’s Santa Monica Studio.

God of War III Remastered is only available for PlayStation 4, for £29.99/$39.99. There’s no online multiplayer, so you don’t need a subscription to PlayStation Plus.

It takes around 10 hours to finish the story in God of War III, and players who finish the campaign will unlock a challenge mode called the Challenge of Olympus.

There are multiple difficulty levels for players of different skill and experience levels.

In the UK and Europe, PEGI rates God of War III as only appropriate for those aged 18 and older for “extreme violence”, “multiple, motiveless killing”, and “violence towards defenceless people”.
http://www.pegi.info/en/index/global_id/505/?searchString=god+of+war&agecategories=&genre=&organisations=&platforms=&countries=&submit=Search#searchresults

The GRA expands on its PEGI details by explaining that “strong violence is used throughout and includes scenes of characters having their heads ripped off and limbs dismembered, shown in full graphic detail with blood and gore effects.” The game also comes with “making of” videos from the developers that include strong language like the “f” word.
http://gamesratingauthority.org/pegi/search_aci.html

In the US, the ESRB rates God of War III Remastered M for Mature, with content descriptors for “Blood and Gore, Intense Violence, Nudity, Strong Language, Strong Sexual Content”.
http://www.esrb.org/ratings/synopsis.jsp?Certificate=33815&Title=God%20of%20War%20III%20Remastered

Lobby group Common Sense Media rates God of War III as “not for kids” because of its “extreme, visceral violence and sex”.
https://www.commonsensemedia.org/game-reviews/god-of-war-iii

The focus on ancient Greek gods avoids any potential issues with including modern religious characters, and also provides an interactive visual interpretation of classic mythology, albeit a particularly violent one.

9. Why people play:
Since the plot of the God of War games is so over the top, people don’t really play them for the story. The relatively unusual setting will appeal to some, but the main draw is the feel of empowerment in this epic saga.