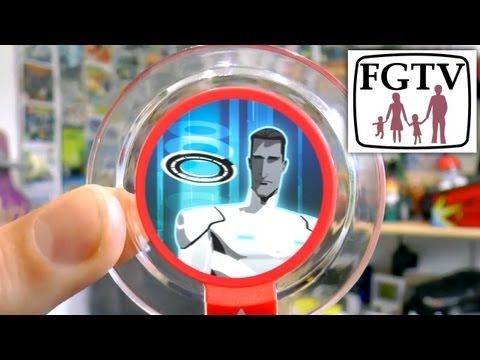 Toys R Us have just announced their exclusive power disc for Tron. This will be available in the US from 7th September to coincide with their Disney Infinity Power Disc Trade event from 12 noon to 2pm.

These circular discs grant a particular character an upgrade when they are placed below them on the portal. Currently the following are available in Wave 1 in the foil packs (and packed in with Starter Packs at random:
– Bolt’s Super Strength — Character that you’re playing with does 10% more damage
– Fix It Felix’s Repair Power — Character you’re playing with has 20% more health
– C.H.R.O.M.E’s Armor Shield — In-game character receives -10% less damage
– Pieces of Eight — In-game character gains 10% more loot

The new Tron themed User Control Power disc will only be available from the retailer and will work in combination with other power discs to grant the character a 10% boost to the experience they earn. This not only means you have to do less to gain the same reward but they will upgrade quicker.

Similar to exclusive Skylanders, these power discs have already started cropping up on eBay for many times their original value. What we didn’t know until now though was where and when the discs would be more widely available and what effect they would have in the game.