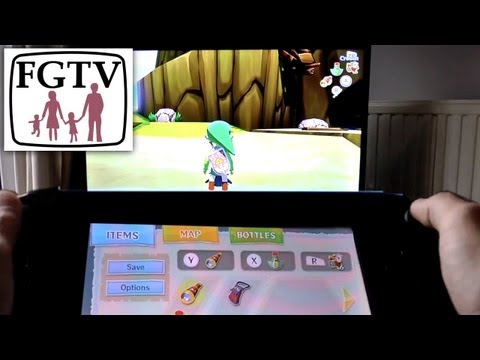 A lot has happened since Wind Waker was released for the Gamecube. In the video-game world we have seen another two generations sweep on and off our radar and in my family there has been the arrival of a new generation in human form – two more children.
The Gamecube game has plenty of sentimental family value for me. Not only does it look super cute and feature a young hero, but it also reminds me of playing the game with my newly born daughter asleep on the sofa beside me or on my lap.
She’s now 10 and we have a fresh rendering of that classic game in the form of Legend of Zelda Wind Waker HD. This, being a single player game is something I had expected to play this while the kids were in bed.
However, it only took an hour or so of playing before my daughter poked her head around the door at the sound of the “Item Found” tune. She wanted to know what I was playing and why it sounded so familiar.
Before long all three children had joined me on the sofa to play Wind Waker and we started to make our way through the first few islands. They were quite taken by the look of the game, and I have to say I found both the familiar visual style and pixel perfect HD rendering to be a compelling next generation experience.
I know you may get more polygons or higher resolutions on other consoles, but it’s the investment in visual storytelling here that makes the real difference. With simple stylised line work, use of scale and motion, not to mention the greater draw distance, Wind Waker HD had us all hooked.
Make no mistake though, this is a Zelda game from the era before the requirement to add increased hand-holding and assistance for family players. I had expected this to be off-putting, and to frustrate the children with slow progress and obtuse puzzles.
I was again surprised to find that quite the reverse was true. Firstly they all happily took turns to play, and assigned themselves different tasks within the game. Ellen (10) read out the dialogue complete with different voices for each character, Thom (8) took charge of the combat and Ollie (5) was best at spotting treasures and secrets. Together they progressed all the way to the end of the first dungeon.
At this point, it was with some relief that they called for my help. I got to play too! The complexity of the bosses meant that they could get past this on their own. As you can see in our Wind Waker video together though we worked as a team and soon had it beat.
As we went on there was one concession that we needed to make for their younger age though. Usually I avoid getting help online and steer clear of cheat guides. Playing Wind Waker with a family I found that we needed to keep the momentum going and these guides sometimes aided our enjoyment. There are some puzzles that you could spend hours running around trying to solve, usually the ones in the open world sections, that a guide can help you navigate with younger players.
I’d thoroughly recommend Wind Waker for families to play together. Certainly, as Grand Theft Auto hits the streets it serves as a timely reminder that not all the tales video-games tell are full of gritty storylines and questionable characters.
Beyond the clever mechanics, visuals and attention to detail, Wind Waker does what all Zelda games do well: catch the player up in the legend of their worlds. Spending time on the different islands not only offers game-play opportunities but connects you to these places emotionally. I can’t wait to see the look on my children’s face when we go back to visit old friends and family on Outset or Windfall Island, or discover new places to adventure on the high seas.
The funny thing is that they haven’t once mentioned that the sailing is boring. In fact it’s their favourite part.