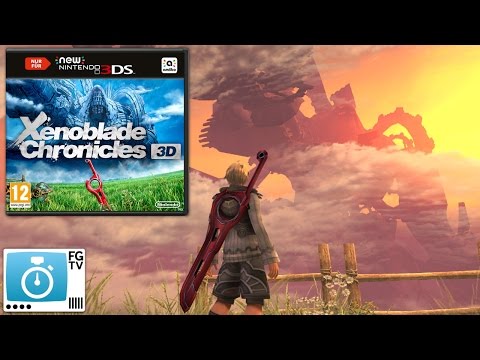 Family guide for Xenoblade Chronicles 3D, from what makes this great to what to watch out for this is the ultimate 2 minute guide.

You play as Shulk, soon joined by a supporting cast that grows physically and emotionally through the game. Ability trees, stat-boosting gem crafting, plus a physical customisation system provide a variety of ways to upgrade each character.

Combat is real-time action-based. Players control the lead character with the rest of the party set to auto-attack when enemies approach. Those attacks can be fine tuned ahead of battle to ensure your team works as one harmonious unit.

Although the game is party based, there is no multiplayer component and no online capabilities. However, you can collect tokens for the in-game the raffle through Streetpass or by touching the Shulk amiibo to the New 3DS.

With a backstory of giant warring titans, Bionis and Mechonis, we join the game many years later with the organic Horns fighting for survival against the robotic Mechon. In the midst of the war, Shulk’s longtime friend Fiora is killed by a mysterious “faced” Mechon during an attack on their colony. After acquiring the mystical soothsaying Monado sword, Shulk then ventures across Bionis to put an end to the Mechon invasion and avenge Fiora’s death.

The original version of Xenoblade Chronicles was developed for the Wii by Monolith Soft, developers of the Xenosaga series of games, while the New 3DS version has been adapted for the console by Monster Games, developers of Excite Truck and Donkey Kong Country Returns 3D.

Players can expect to get 100+ hours of gameplay from Xenoblade Chronicles 3D with the difficulty dependent on how much time is invested in side-quests that enable you to upgrade at a faster rate.

This game was rated PEGI 12 for fantasy violence and mild offensive language. Not suitable for persons under 12 years of age.

The game features frequent, mild violence against human and animal-like characters. In frenetic battles, human characters will dispatch various fantasy, human and animal-like enemies with oversize guns and melee weapons. Action is accompanied by bright flashes of light and damage is mainly shown by life bars during combat, though humans my slide back slightly when hit and faint to the ground when defeated. In cut scenes, action is more intense, with characters being thrown backwards or being grabbed and dragged off by their mechanical enemies.

The word ‘damn’ is used reasonably frequently, while hell is used once.

In the US, the ESRB rates Xenoblade Chronicles 3D for a Teens audience, with content descriptors for Blood, Mild Language, Partial Nudity, Use of Alcohol and Tobacco, Violence

Some cutscenes include other instances of violence: a god-like character getting impaled with a spear; a dragon getting slashed with a sword. Some environments depict blood splatter on the ground; in one cutscene, a character is depicted coughing up blood. A handful of female characters are dressed in skimpy outfits that reveal large amounts of jiggling cleavage, and one cutscene depicts a male character’s exposed buttocks.

Although the overarching story deals with themes of loss, war and vengeance, our protagonist is fighting a noble battle for the survival of his race in a wildly imaginative science fiction setting.

The vastness of the world creates a grand sense of discovery. The variety of enemies the player confronts will provide families with an opportunity to address the nature of combat in fictional settings and the varying impact of slaying a fantastical creature versus a humanoid.

Behind the scenes the affinity system manages relationships between characters, teaching players about the benefits of working as a team as well as allowing players to activate heart-to-hearts between two player characters. These moments present the player with a deeper understanding of their characters’ relationships, allowing them to make choices that shape their future behaviours.

Xenoblade Chronicles 3D might have the a Japanese role-playing heritage, but it combines the best elements of its Western counterparts to create a uniquely designed experience with a cast of characters that are as charming as the world they inhabit is beautiful. But it’s the scale of the saga and puzzle-like combat that provide a deeper draw and the grand scope of a video-game classic.