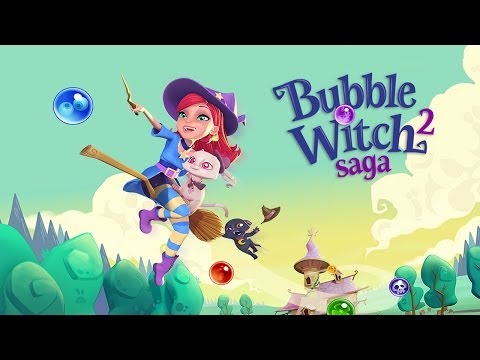 Official blurb:
“Coming soon to Facebook and mobile, this all-new installment of the ever-popular bubble shooter will enchant players with a wide variety of all-new bubble bursting game action.

Where the original Bubble Witch Saga was set in the East and drew from the wicked world of evil, Bubble Witch Saga 2 will bring gamers into the enchanted land of the West with the goal of doing good. Each exciting level of Bubble Witch Saga 2 will offer an exciting range of all-new game mechanics that will keep players engaged and on the edge of their broomsticks throughout their journey. In the pursuit of good, players can go further into the world of Witch Country by utilising additional boosters and game-play modes that allow them to more easily collect and clear groups of bubbles and magical elements.

Additionally, as with all King games, Bubble Witch Saga 2 on mobile will sync to Facebook so players can unlock new levels and access leader boards without losing their progress in the game. More details will be revealed closer to the game’s official release.”