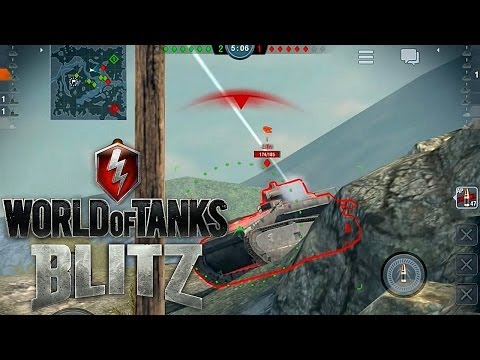 World of Tanks Blitz is the the iOS version of the extremely popular PC & Xbox 360 game World of Tanks. When you usually think about PC or console games making the move from the big screen to the iPad you tend to assume that features will drop and the experience will be lessened by the move.

World of Tanks Blitz, however, is essentially the PC game squeezed onto the iPad and the same attention to detail, customization options and experience is almost identical.

With some fantastic visuals all that’s been downscaled are the match sizes from 15 to 7 players per team but that’s still enough to give you a sense of frenetic fire when playing a game.

Matches are straightforward, sticking to the well-worn formula of capture the flag or defeat all enemies in order to win. This enables the maps and tactical gameplay element of World of Tanks Blitz to shine forth and take centre stage. This isn’t about charging forward, cannons blazing because you’ll be mincemeat in seconds. Instead, working as a team or using classic battle tactics stands you in greater stead and this makes each match different and exciting.

My only problem so far is the controls. A virtual analogue stick to manoeuvre a tank around was always going to be tough and although it’s the best a touchscreen game could offer it stills takes a bit of getting used to.

I’ve put a lot of hours into the PC version of World of Tanks so I was perhaps expecting Blitz to be a lightweight and throwaway experience – not so. The same deep level of customisation is here and tanks from the USA, USSR and Germany are available from the off. Upgraded turrets, engine, tracks and ammunition mean you could be playing Blitz for years to come.

As a free-to-play game you have to expect in-app-purchases and Blitz has its fair share. It’s a little too early to say if this is going to affect your enjoyment right now. You could certainly pay to upgrade and buy the best tanks if you were willing to spend cash on it. Blitz also offers a Premium and Subscription model if you’re serious about the game offering rewards such as increased experience per battle and more credits and gold. None of this is new to the World of Tanks Universe as the PC game and its two siblings – World Warplanes and the upcoming World of Warships are free-to-play with an in-game-purchasing economy in place.

If you’re mad about a proper tank game or simply want to carry on your obsession from the PC to your tablet then World of Tanks Blitz is an astounding achievement and incredibly fun to play.