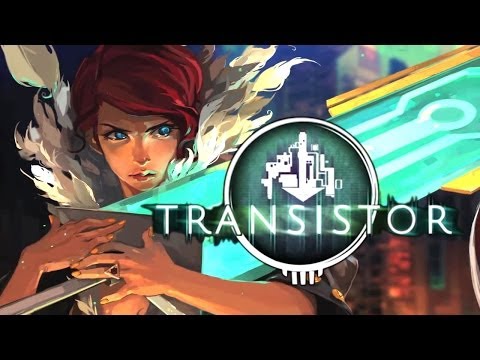 Much like SuperGiant Game’s previous work – Bastion – Transistor sports a gorgeous isometric-like art-style that both looks like a classic and futuristic at the same time.

Available on both PS4 and PC, the PlayStation game has something of an edge in its use of the Dual Shock controller light and speaker to make it seem that the titular sword is in your hands speaking to you.

You play as Red, a sultry-looking protagonist who wields the Transistor, the titular weapon of the game. Combat is a fascinating mix of action RPG skills and abilities but with the option of freezing time and being able to plan out your moves. Seemingly just cool to begin with it soon turns into an essential tool in order to navigate the battlefield successfully.

You’ll need that time to plan your attacks anyway because of the massive variety of skills available to you. The first hour of Transistor sees you acquire around 4-5 weapon abilities from the fallen bodies of a few important citizens. Each abilities is keyed to a particular person important to the storyline or your character and as you use these skills more and in different ways, more of their back-story is revealed.

It’s a brilliant way to obscure story and allow it to unlock naturally. The more you want to know the more you’re going to have to use the skills and tools made available to you.

I didn’t initially think I wanted Transistor to be such a blank slate in the beginning – it starts will no fanfare and you get straight into the game – but after a few hours the sense of discovery about it, the systems and Transistor’s story made me feel a part of this game rather than just the observer.

The narrator from Bastion (easily the best feature of that game) returns here as the voice of the weapon – the Transistor. Just as in Bastion this feature feels integral to the game and an important perspective on what’s happening around you.

The combat theme is very cyberpunk or hacking style with combat moves named after computer programming code commands. This fuses perfectly with the visuals of the city you’re in and lends a sense of unease about the whole environment. I was constantly unsure of what was real, what was part of a computer program or whether the whole thing was a ruse to make me feel that way.

If I’m going to be critical about any aspect of the game then I guess I could say it’s a little short, clocking in at around 5 hours. But if, like me, your time is at a premium then you should be more than happy to hear that each one of those 5 hours is high quality. Longevity is build into the xxxx mode of play which is essentially a new game plus – replaying the game with all the skills and levels you achieved carrying over and the enemies – the Process – being much stronger.

Transistor is by far my favourite game of 2014 so far. It enabled me to lose myself in its fascinating world and kept me engaged with its blend of tactical RPG combat action and a dramatic narrative.

Transistor is out 20th May on Steam and PlayStation 4.