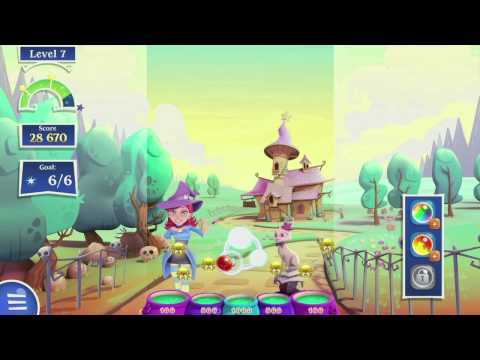 Candy Crush Saga is everywhere these days, my kids recently discovered it and it has even eclipsed their obsession with Minecraft and Skylanders. The question for developers King, and their new shareholders since its floatation, is whether this was a flash in the pan or something they can repeat.

If you haven’t kept track with the numbers King has a network of 352 million monthly unique users as of first quarter 2014 and offers over 180 exclusive games in 250 countries. It is based in Europe and has game studios in Stockholm, Bucharest, Malmö, London, Barcelona and Berlin along with offices in San Francisco, Japan, Korea and Malta.

A direct Candy Crush Saga sequel came out earlier this year, Farm Heroes Saga. Today King announced another sequel to their popular bubble matching game, Bubble Witch. Bubble Witch Saga 2 will be coming soon to Facebook and mobile, applying candy crushing know-how to the long in the tooth genre dating back to the Bubble Bobble spin off, Puzzle Bobble, in the mid 90s.

I spoke to Jan Wedekind, Business Performance Director at King’s Barcelona studio, to find out more about the company since its floatation on the stock market and how the new title fits into their efforts to continue successes beyond Candy Crush.

I suggested the new game would find it harder to hit the same zeitgeist, being a follow up rather than something original. Wedekind was quick to highlight that timing and quality are often more important than original features in the technology market. He used the iPhone as an example “that had nothing new, but turned out that it revolutionized completely the way we look at phones and smartphones.”

“When we look at casual games what we want is something that has a touch of familiarity to it. The first entry point should be something that you can get in less than a minute, from then on you need a lot of variations and innovations in the game play.”

I asked Wedekind what feature Bubble Witch Saga 2 offered on this side of the experience. He suggested that this was about design and making the game playable in any location. “We realized that it was impossible to play the game in landscape mode with one hand. You want to be able to play where you are in the bus or tube on the way to work.” This resulted in game-play focusing on the portrait orientation.

Wedekind went on to describe some other innovations. “The original game only had one core game-play mechanic but in the sequel we’ve added fundamental new game modes like the Jelly mode in Candy Crush.”

Pressing Wedekind on whether we would see Candy Crush for console or handheld platforms and he suggested this would only happen when their players demanded it. He also ruled out the possibility of a Flappy Bird style game from King.

Finally I asked whether being answerable to shareholders to return a profit would change the ethos of King. “This isn’t a short lived start-up with a quick exit strategy. Everybody is still working here the same as before. We are still focused on doing the best game possible.”

Seeing the game in action it certainly has the Candy Crush Saga feel to it, while drawing on existing tropes from the bubble matching genre. As Wedekind suggested it may well be timing, and a well planed advertising push, that determine the success here as much as any one feature.

Bubble Witch Saga 2 will be available later this year, or “when it’s finished” to quote Wedekind.