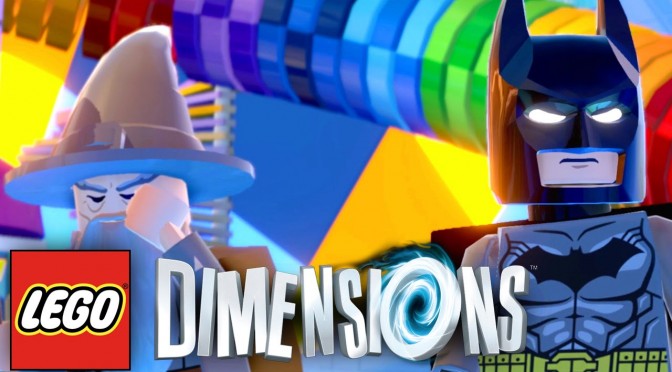 What results for Dimensions is a tale of a tyrannical overlord after control of LEGO’s foundational elements. Rather than Lord Business’ subtle brain washing of the masses, Lord Vortech is a more direct villain. From his planet at the center of the LEGO Multiverse Lord Vortech starts conjuring vortexes to suck in different characters from a variety of LEGO worlds to help him find these building bricks of LEGO civilization. Some have agreed, others have rebelled, and only the combined powers of the greatest LEGO heroes can stop him.

This leaves Batman, Gandalf and Wyldstyle to realize Lord Vortech’s plan and team up with a range of unexpected characters to travel through space and time and rescue their friends before the vortexes destroy all of LEGO humanity.

It’s a narrative that serves its purpose and creates a context for the gleeful combination of all those mismatched characters. The game-play trailer that accompanied the announcement underlined this with a range of characters in unusual locations.

It also seems to explain how the game divides between Starter Pack and Level Pack content. The various characters seen being sucking into the Lego vortexes complement the characters we have announced in physical form. Frodo, Dorothy and Robin are not included in the expansions packs but feature here in apparently playable form.

This would fit with the understanding that all 14 different worlds are playable with only the Starter Pack, and that these are then expanded upon with the Level, Character and Team packs. Being able to access every brand from the go is a strong play by Warner to offer families better value than with competitors like Disney Infinity where you need to purchase additional figures and play-sets before you can sample the full range of brands.

While this is of course conjecture, the more I see of Lego Dimensions the more I am impressed. Certainly, of the three main Toys to Life games, Dimensions has the highest price of entry so it would make sense that it offered the free-est access to content.