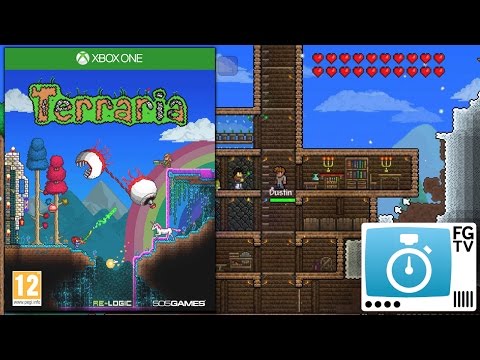 Parents guide to Terraria. From what makes this great to what to watch out for here’s the ultimate 2 minute guide.

Terraria is an action-adventure game in which players explore an open world containing a wide variety of creatures, plants and ores. Each area is different and presents the player with a unique challenge and opportunities for crafting and combat. Often compared to Minecraft, in part due to the retro graphical style, Terraria differs mostly with it’s 2D side-scrolling style.

Players start the game with three basic tools: a pick-axe for mining, a short sword for combat and an axe for woodcutting. These tools allow the players to acquire the resources they need to craft new items and equipment that help them explore deeper into the world, completing a variety of goals as they do so.

As well as providing a single player experience, the game can also be played on multiplayer worlds in which many players can team up to craft, build and slay monsters. A player versus player mode can also be activated which allows players to fight against each other, either as every man for themselves or in colour coded teams.

5. Length:
The game has no story, but due to the open-ended nature of the game, you can play it for as long as you want.

6. PEGI/ESRB rating:
This game has a PEGI 12 rating. PEGI state that the game contains non realistic looking violence towards human characters and allows players to interact with each other online.
http://www.pegi.info/en/index/global_id/505/?searchString=Terraria.

7. ESRB detail:
The Teen rating from the ESRB goes into more detail, stating that players often encounter fantastical/”cartoony” enemies such as slime creatures, vultures, zombies, and flying eyeballs. Players use swords and axes to slash at enemies; some enemies emit small drops of blood when struck, while other creatures burst into pieces when killed. The dialogue also describes manner of death in detail: “[Player]’s face was torn off by Zombie” and “[Player] was eviscerated by Zombie.” Some dialogue contains suggestive material: ‘What do you mean, she don’t sell anything?” “I don’t give happy endings,’ and ‘Too bad she’s such a prude.” Players can craft power-up/enhancement items that include kegs, and mugs of ale; player’s status sometimes indicates “tipsy” in on-screen text.

9. Themes
Although the game does feature combat the game’s focus on building and exploration is the central theme. Children can use their understanding of the real world to work out how to craft materials in the game, using wood to make walls and workbenches, . stone to build houses etc.

Crafting in a virtual world allows children to create almost anything their imagination can conceive with materials that would likely be out of reach in the real world. Experimenting in this way may lead to a desire to replicate the experience in the real world complementing their virtual skills with real world design and construction skills.

10. Why people play:
The resemblance to Minecraft is an obvious attraction, but it’s that same freedom to explore and create are the main draw for fans of Terraria. With a procedurally generated landscapes there’s always new experiences around the corner that will always be unique to you and your character.