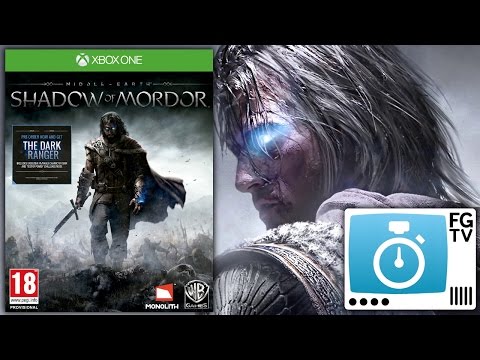 Welcome to Family Gamer TV and everything that families need to know about Shadow of Mordor. From what to watch out for to what makes this game great, this is the ultimate 2 minute guide.

1. Genre and story:
Shadow of Mordor is a single player, third person adventure game based on the Lord of the Rings books. Despite the game’s setting it only features Gollum from the books and should be seen as a very separate tale. The game takes place between the adventures of the Hobbit and the Lord of the Rings and follows a ranger named Talion who sets out to avenge the death of his family.

Talion teams up with ghostly Elf Celebrimbor with a mysterious past linked to the Rings of Power. As players attempt to seek revenge the plot of Celebrimbor’s past is told.

Shadow of Mordor plays in a very similar style to the popular Assassins Creed and Batman Arkham series. You play as a powerful warrior and explore a landscape battling fantasy creatures in real time combat. Progression leads to the ability to upgrade your character, and you become more and more powerful as you play.

A key feature of the game is the Nemesis system, a real time social political structure for the Orcs of Mordor. This is dramatically affected by the player’s actions and determines how the game develops.

2. Developer:
Shadow of Mordor is developed by Monolith Studios who have previously released, amongst many other big name titles, the Lord of the Rings game Guardians of Middle Earth.

4. Cost:
In the UK the game has a recommended retail price of £35 and in the US for $50. The game also has a Season pass available for it that adds downloadable content to the game, this costs £20 in the UK and $25 in the US. Neither Xbox Live or the Playstation Network is required to play the game though connection to the service is required to purchase the downloadable content.

5. Duration:
Shadow of Mordor takes around 13 hours to complete the main story but offers lots of collectibles that can easily extend this to around 20 hours.

6. UK and Europe – PEGI rating and additional consumer information:
In the UK and Europe PEGI rate Shadow of Mordor suitable for the over 18s citing “extreme violence”. GRA expand on their PEGI rating, stating that the game “contains ‘finisher’ moves” where the player “thrust[s] his sword into the face of the character and upon withdrawing the blade from its face, decapitates the character. This is accompanied by a large amount of blood.”
http://www.pegi.info/en/index/global_id/505/?searchString=shadow+of+mordor
http://gamesratingauthority.org/pegi/search_aci.html

7. US – ESRB:
In the US the ESRB rate it as M for Mature, only suitable for players aged 17 years and above, stating that in the game players use “swords, arrows, knives and axes to kill fantastical creatures in frenetic close-quarter combat. Fighting is highlighted by screams, impact sounds and blood-splatter effects. Players also have the ability to slit enemies’ throats, stab or impale them, and decapitate creatures’ heads, which is often seen in slow-motion.”
http://www.esrb.org/ratings/synopsis.jsp?Certificate=33558&Title=Middle-Earth%3A%20Shadow%20of%20Mordor&searchkeyword=shadow%20of%20mordor

8. Common Sense Media:
Common Sense Media states that Middle-Earth: Shadow of Mordor is a very challenging, extraordinarily violent melee action game targeted at adults and not to be played by children. “Players engage in sword-, dagger-, and bow-based combat, during which the game’s hero” depicted in “slow motion, creating deluges of blood and making severed heads fly through the air. ”
https://www.commonsensemedia.org/game-reviews/middle-earth-shadow-of-mordor

9. Themes:
Players seek revenge of the death of the main character’s family, killing hundreds of Orcs in the process in violent close combat. It’s an approach partially criticised by the game that underlines the risk of making him as much of a monster as those he kills. Still, the only real way to progress the story is through violence.

The lore and tradition of Tolkien is well attended to, although sometimes weighed down by its own complexity. Fans of the books will enjoy the expanded mythology and world in the game, but some may find the experience lacks both the weight and mystery of the novels.

10. Why people play:
This is an intelligent, well presented, if violent, depiction of Middle Earth that allows its players to feel suitably empowered to take on the might of Mordor.

After years of waiting, Shadow of Mordor finally delivers a substantial video-game experience in the Lord of the Rings universe. The story and setting will draw players in, but it is the combat and political system that will keep them playing.