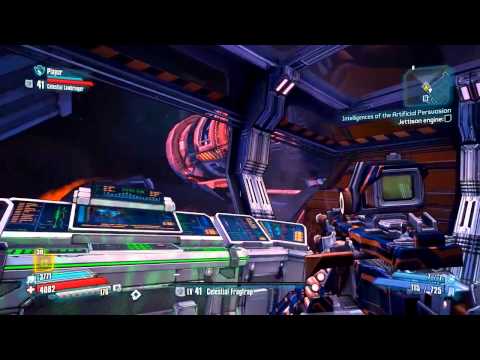 1. Genre and story:
Borderlands: The Pre-Sequel is a first person shooting game where players shoot human enemies in a science fiction setting. The game can be played alone, but also in cooperation with online team mates.

This is the third game in the popular Borderlands series, which combines frenetic, colourful violence with eccentric characters over the top humour.

The ‘pre-sequel’ sub-title is a tongue in cheek reference to the game’s story being set between the events of Borderlands 1 and 2, charting the rise of Borderlands 2 villain Handsome Jack. The game promises to retain the series’ vivid cartoon graphics, offbeat humour and over the top violence, while the new setting of one of the moons of Pandora promises new environments and new gameplay elements like zero gravity and oxygen tanks.

2. Developer:
Borderlands The Pre-Sequel is developed by 2K Australia, a studio that has worked on the Bioshock series and X-Com: The Bureau, rather than by Gearbox, the studio that developed Borderlands 1 and 2. However, Gearbox have contributed to the game and overseen its development, so the Pre-Sequel should match its predecessors.

4. Cost:
Borderlands: The Pre-Sequel has a recommended retail price of £49.99 for the console versions and £39.99 on PC. Online play is free on PC and PS3, but requires a paid subscription to X Box Live Gold membership on Xbox 360.

Four downloadable mission packs will be available after release for around £7 each or all together as a Season Pass costing around £20.

5. Length:
Borderlands: The Pre-Sequel should take around twenty hours to complete, quicker for experienced players willing to skip side quests and tear through the main campaign. However the Borderlands series has always provided plenty of opportunity for repeat playthroughs as different characters or with different online friends, so the Pre-Sequel should keep fans busy for weeks.

6. UK and Europe – PEGI rating:
In the UK PEGI rate Borderlands: The Pre-Sequel 18 with content descriptors for extreme violence, multiple motiveless killing, strong language, content that encourages or condones gambling, and that the game allows players to interact with other people online. PEGI states that ‘Violence consists mainly of your player shooting at human characters wearing post-apocalyptic clothing or futuristic armour, with a variety of guns. It’s fairly realistic with blood effects and corpses lying about. The worst of the violence happens when you shoot at them causing meaty chunks and indeterminate body parts to go bouncing along the floor.’ PEGI also notes that the game involves the killing of unarmed people by the player, and that although sexual swearwords like ‘fuck’ and ‘cunt’ are bleeped in dialogue, it is clear what those words are, including in subtitles.

7. US – ESRB:
In the USA the ESRB rate Borderlands The Pre-Sequel ‘M’ for ‘Mature’, suitable for over 17s, stating that gameplay involves “pistols, machine guns, grenade launchers, combat can be frenetic at times, highlighted by cries of pain and realistic gunfire; human enemies emit large splashes of blood when hit.” The ESRB also highlight that the game sometimes requires players to shoot unarmed opponents to complete missions, and that dialogue involves swearing and sexual references including ‘asshole, ‘prick’ and ‘bitch’.
http://www.esrb.org/ratings/synopsis.jsp?Certificate=33702&Title=Borderlands%3A%20The%20Pre-Sequel

8. Common Sense Media:
Common Sense Media’s preview of the game says that parents need to know that “Players can expect to spend the bulk of their time engaged in frenetic fire fights with human enemies who scream in pain and spray red gushes of blood when hit. Mature themes are likely to include skimpily dressed female characters and occasional references to sexuality in spoken dialogue.”
https://www.commonsensemedia.org/game-reviews/borderlands-the-pre-sequel

9. Themes:
Borderlands: The Pre-Sequel addresses the possibility of good intentions leading to terrible outcomes, with Handsome Jack descending into villainy and becoming the monster we know from the sequel. To this end, expect to be made uncomfortable as you pursue enemies who turn out to be not all bad, while the player characters morally lose their way.

10. Why people play:
The Borderlands series has been a breath of colourful, loud and irreverent air into the stale and muddily macho genre of first person shooters, and Borderlands: The Pre-Sequel continues that tradition. As well as plenty of loot to find and carnage to cause there’s the treat of playing as a Claptrap, one of the series’ signature deranged robots.

Finally, this is a rare last generation exclusive as major action games move largely to the PS4 and Xbox One, so fans of the older consoles should appreciate this.