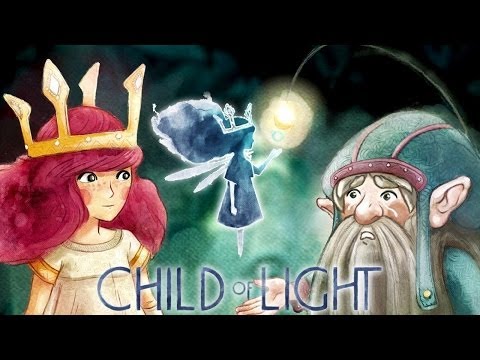 Here’s something a little bit special. A beautifully rendered role play game where you control a girl through a hand painted landscape. It may look a little like Braid but it plays very differently.

Today, Ubisoft announced that Child of LightTM will be release digitally on April 30th, along with a special boxed Deluxe Edition on PlayStation® 3, PlayStation® 4 and on Windows® PC.

The Deluxe Edition contains:
– A poster designed by Yoshitaka Amano, the renowned Japanese artist
– A 24 page art book with unrevealed artwork
– An Igniculus key ring.
– A bonus quest
– A new character and a pack of collectibles.

The PlayStation version is cross buy, so purchasing Child of Light on PlayStation 3 will grant access on PlayStation 4. No mention of a Vita version through which would be our preferred platform.

Child of Light offers a classic fairytale experience taking players on an epic adventure into the magical painted world of Lemuria. They will uncover mysteries, participate in turn-by-turn combat inspired by classic JRPGs, and explore a mystical kingdom.

You play Aurora, a child stolen from her home, who, in her quest to return, must bring back the sun, the moon and the stars held captive by the Queen of the Night. Helped by her companion Igniculus the firefly and several unlikely allies, Aurora will face her darkest fears, including dragons and other mystical creatures, in this modern take on a coming-of-age story.

Child of Light will be available for download on Xbox LIVE for the Xbox® 360 and Xbox® One, the PlayStation Network for the PlayStation® 3 and PlayStation® 4, the eShop from Nintendo for the Wii U, and PC Digital, at the price of £11.99.