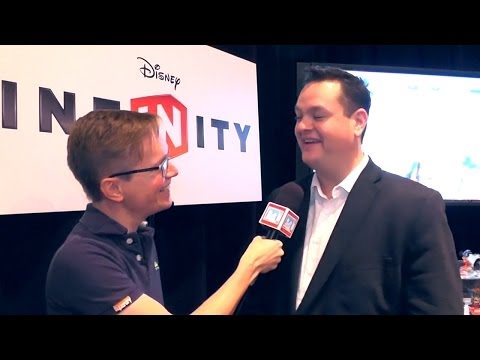 I caught up with Executive Producer for Disney Infinity, John Vignocchi, and quizzed him about the Wii version of the game before diving in to Phineas and Ferb.

I asked whether more needed to be done to communicate to parents exactly what each physical character unlocks in the game. Some grant access to big Play Set adventures and the Toy Box mode (Toy Story play set for example) while others only offer a Toy Box mode with a mini adventure (Sorcerer’s Apprentice Mickey for example).
“I would say that if you look at the packaging it does a great job about which character belongs to which play set also whether they are toy box only. But there’s always room for improvement.”

What was the thinking behind the Disney Infinity starter packs that don’t include the two player main campaign mode with an additional character being purchased?
“When we were talking about the best thing to do we felt that providing a variety of properties rather than just one was better. You can immediately play two players with the starter pack in the toy box mode.”

I asked Vignocchi which version he would suggest families to buy at retail.
“For what we are doing in the Toy Box mode, having a system with the horse power of a Wii U, 360 or PlayStation 3 is really the best place to participate. You can make your toy box larger and have on-line play as well.” Vignocchi wouldn’t be drawn on whether they would be supporting the Wii version of Disney Infinity going forward.

Finally, I asked what he expected from competitor Skylanders and whether that would effect Disney Infinity. He was roundly positive, “this whole entire category that we’ve kind of come up with continues to grow, both companies have a great opportunity to make this toy-video-game category get even bigger. It’s all about software, great toys and quality.”