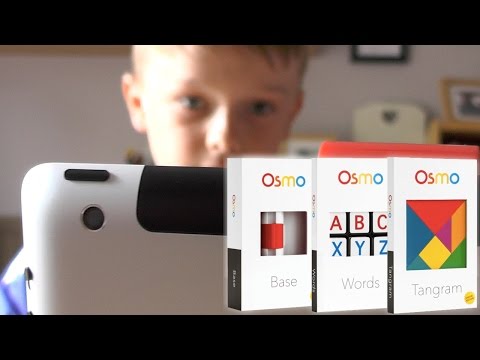 We spoke to Tangible Play CEO Pramod Sharma ahead as the release of their ground breaking Osmo app on iOS draws near.

He talks about how they developed the game and how it was inspired by Skylanders, Wii and Kinect.

Osmo is the iPad app that offers educational games played by manipulating objects in front of the iPad’s camera. It uses a mirror over the tablet’s camera to skew its gaze down to the action on the table and can instantly detect letters, shapes and in some cases children’s drawings. As Sharma described the itterative development of the app, “I have a five year old daughter who loves iPad, but I wanted to extend the iPad experience. We realized that the mirror was required to get the iPad to look at the table.”

The response has been impressive online, something reflected in the families I’ve tried the game out on — and occasions where I’ve used dinner party guests as guinea pigs. In fact such was the popularity of the beta program that stocks ran low almost instantly. Sharma assure me that they were ready for the demands of the launch, “we are in pretty good shape now, it wasn’t the case three months back. We’ve had to redo our supply chain but I’m pretty comfortable that we will be able to scale up.”

“I’ve seen the Skylanders experience and I feel there has been a lot of evolution of how the physical world can interact with a digital experience. I see Skylanders, Wii, Kinect as some steps and [Osmo] is expanding on that experience.” Sharma talks about going further than the back and forth of toy figures or hands free interactions so that “the boundary between real and digital will be come seamless so you don’t see a separation, and so Skylanders has been an inspiration for what we have done.”

Osmo launches with three games to begin with, Words, Tangram and Newton. Of these the Words game is most accessible and popular in my family. At launch this offers more difficulty settings and the ability to set-up your own picture-word combinations via the myosmo website which will be very popular for school and educational uses. In fact Sharma confirmed that the app is already being used in over 2,000 schools.

The team working on those games has grown since Tangible Play started and now includes talent from Google, Stanford, Disney and other entertainment companies. “We have there three or four different areas of expertise and bring them together to launch a new kind of play.”

Osmo will be available on iOS on 16th October, the physical component can also be purchased from the Osmo website.