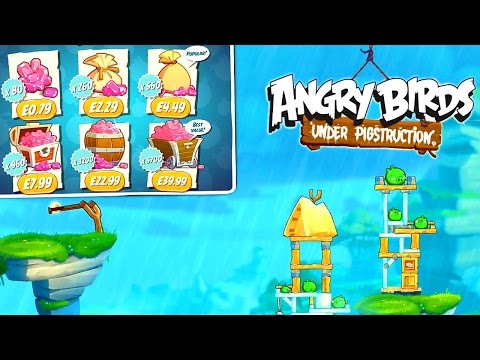 It’s been five years since the original release of Angry Birds and in the intervening period there have been more than ten further games released to expand the franchise. Most recently those games have taken Angry Birds into new genres, with Kart Racers and RPGs. Then there are the growing ranks of cross-over titles, Angry Birds Star Wars and Angry Birds Transformers and of course the inclusion of telepods toys, bridging the physical and digital Angry Birds worlds. So it’s perhaps fitting that Rovio have gone back to their roots with the latest entry into the series, Angry Birds Under Pigstruction.

Toons.TV has been a big success for Rovio and it’s inspiration can be felt in Angry Birds Under Pigstruction, as the standard Angry Birds formula gets a new level of polish and a more cartoon-like aesthetic to complement the familiar physics based gameplay. Characters have more personality, both visually and through their gameplay, while structural assets in the game world appear with far more detailed textures.

Angry Birds Under Pigstruction follows the tried and tested Angry Birds gameplay formula, but builds in a lot of the ideas that Rovio have learnt over the years from titles like Angry Birds Star Wars and Angry Birds Stella. Boss battles are a notable inclusion, diverting attention from the standard structural demolition to instead try to bring the house crashing down on top of one of the bigger badder piggies in the game to progress. Spell power-ups also bring an added freshness to the gameplay, but again it all feels very familiar.

Players can also select which order they use the birds from their flock to tackle each level, with each having it’s own unique power, making the technical challenge of each level a little more interesting than a simple pull and fling. This is all more evolutionary than revolutionary, but it looks and feels just as fun as our first experience with the furious foul.