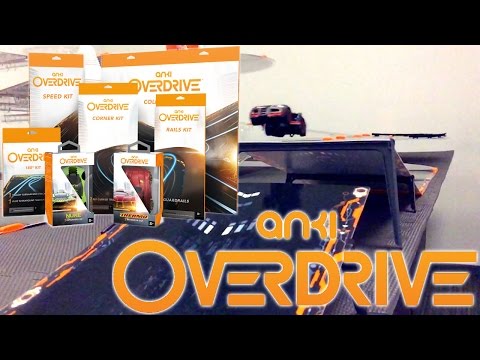 We have a look at the Anki OVERDRIVE expansion kits starting with the Launch kit and the Collision kit.

Full list of Expansions track packs include:
– Launch Kit – Reach for the sky with jumps on the battlefield. Launch ahead, nail the landing, and smoke the competition.
– Collision Kit – Race into a lethal intersection, pick off your opponents as they speed past or take a short cut to chase them down. Watch out for devastating collisions and don’t get caught in the crossfire.
– 180° Kit – Snap this U-turn piece to any track section and open up the battlefield for head-to-head combat. Build open circuit tracks to face down enemies, unlock longer courses and bi-directional racing.
– Speed Kit – Put the hammer down and outrun opponents or take aim and knock out the competition on these long straightaways.
– Corner Kit – Take these turns at top speed. Or blast opponents before they disappear around the bend.
– Rails Kit – Slingshot into straightaways or drive the fight into corners. Guardrails ensure the chaos of battle stays on the tracks.
– Elevation Kit – Take the battle to another level. Open up crazy track possibilities with hills, bridges, underpasses and more.
– Bank Turn Kit – Race around corners at faster speeds and pull some serious G-forces.