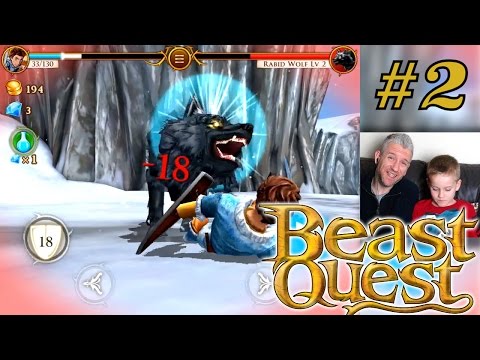 It’s time to return to the land of Avantia as we continue our quest for Nanook in Beast Quest, the upcoming mobile game based on the hugely popular children’s book series of the same name. We once again take control of Tom as father and son work together to complete quests, slay rancid wolves, find hidden treasure and upgrade our equipment. Accompanied by lilac haired Elenna, we’ll face down the worst that Avantia can throw at us.

As we progress through the game, greater fighting challenges are revealed and light puzzle elements are introduced. It may have been straightforward learning to fight against a single enemy, but how about two or three at the same time? New mechanics are revealed to help us, but it’ll take great skill and use of both our shield and some timely dodges to win the day. The rewards of success aren’t just limited to gold and experience, with fragments from magical amulets to be found scattered around the world.