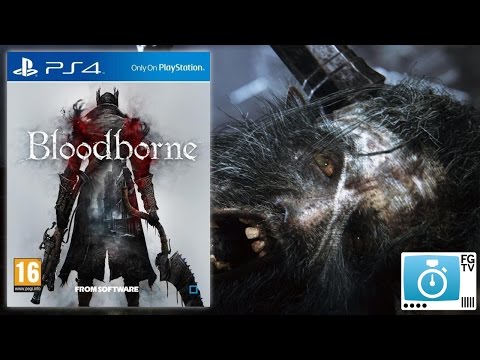 Guide to Bloodborne, from what makes it great to what to watch out for here’s the ultimate 2 minute guide.

Bloodborne is an action role-playing game. The player character makes their way through an ancient city, using various melee weapons and firearms to deal with hordes of monstrous enemies. Beneath the city is a procedurally generated dungeon that provides an extra challenge.

Aside from the inclusion of guns, Bloodborne is similar to Demon’s Souls and Dark Souls, two previous games from the same developer that are primarily known for their high level of difficulty.

2. Story
In Bloodborne, you’re a visitor to a city that is supposed to be a destination for pilgrimage of the sick or hopeless but is now beset by a plague that has turned its citizens into monsters. You want to find answers, and to stay alive.

3. Developer
Japanese developer From Software is responsible for dozens of games but is probably most famous for Demon’s Souls and the Dark Souls series.

5. Duration and Difficulty
The duration of the game will depend on player skill, but it’s rumoured to take around 40 hours if not more.
While it might not be as difficult as its spiritual predecessors, Demon’s Souls and Dark Souls, Bloodborne is still a challenging game.

6. UK Rating
In the UK and Europe, PEGI rates Bloodborne as only appropriate for those aged 16 and older for “frequent scenes of moderate violence”.
http://www.pegi.info/en/index/global_id/505/?searchString=bloodborne

The GRA expands on its PEGI details by explaining that “the violence during the gameplay is fairly mild with characters hacking, slashing and shooting at each other with little physical response to these attacks, however copious amounts of blood effects are shown. More detailed violence can be found in the cut scenes, in particular the intro, when human-like characters are slashed, stabbed, and shot with realistic consequences. During gameplay fallen corpses will remain visible in order to affect a sense of realism”. The GRA also points out that the game “features online playing capability which may involve real-time interaction with other players.”
http://gamesratingauthority.org/pegi/search_aci.html

7. Other Ratings
In the US, the ESRB rates Bloodborne M for Mature, with content descriptors for Blood and Gore, and Violence, as well as “online features that may expose players to unrated user-generated content”. The rating summary lists some of the weapons – “cleavers, axes, and pistols” – and their effects: “realistic gunfire, impact sounds, and large blood-splatter effects. Some sequences depict instances of blood and gore: a ghost holding its own severed head; a creature ripping its limbs to attack characters; a partial view of a beheading.”
http://www.esrb.org/ratings/synopsis.jsp?Certificate=33841&Title=Bloodborne

8. Themes
Bloodborne is set in an ancient city filled with supernatural horrors, which may be unsettling for some players. The mix of mutated and mutilated townsfolk and the underlying mysterious pandemic will unsettle those sensitive to horror themes.

9. Why people play:
Bloodborne has a great art style for its fictional city and the monsters you’ll find there but the biggest draw is its unforgiving combat and high difficulty level, which will appeal to those players – like fans of Dark Souls – who like a challenge.