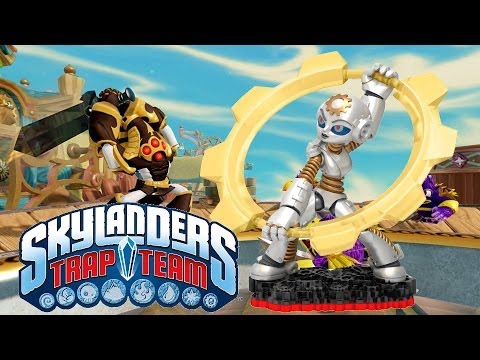 We’re within touching distance of the big E3 games expo next week where we expect to get all the latest Skylanders: Trap Team news and some hands on time with the game, but while we’ve been waiting for that, there’s been a few more characters revealed.

In this video, we get final confirmation of the Undead Trap Master, Krypt King we showed you in our previous video along with the brand new reveal of Gearshift, the Tech element Trap Master. She’s a stylish looking robot complete with a Traptanium cog that she can split in two to wield as vicious blade like weapons.

We’ve also got the latest scoop on Trap Team pre-orders for you, with Outlaw Brawl and Chain and the possibility of vehicles in Trap Team. We think the latter is unlikely, but one specific retailer’s pre-order bonus suggests we’re going to get them.

Last but not least we also have a close look at the special Kaos Trap and finally reveal which element he belongs to.