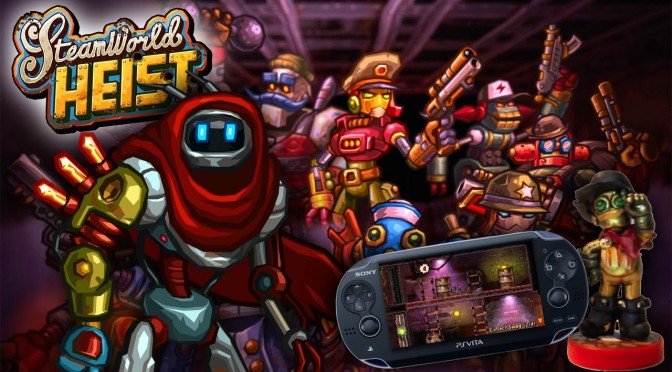 We talk to Brjann Sigurgeirsson of Image and Form about today’s DLC for Steamworld Heist.

Along with the new levels, guns, hats and character we also ask about a Steamworld amiibo, more DLC for Heist, other platforms like Vita, PS4, Xbox and what’s next for Heist.

We take a quick look at the custom ZanarkandSky amiibo for Rusty:
https://www.etsy.com/shop/ZanarkandSky

Music in the video from Steam Powered Giraffe:
http://steampoweredgiraffe.com/

Here’s the official blurb.
On April 28 we introduce The Outsider – Image & Form’s first add-on content (DLC) for the studio’s acclaimed strategy shooter SteamWorld Heist on Nintendo 3DS. The Outsider will costs $4.99/€4.99/£4.49 or the equivalent.

Meet Fen: the latest member of your Heist crew, and the most unlikely of allies. A Vectron outcast, Fen breaks the ties to the hive mind and becomes one of your most formidable fighters.

The Outsider is not a conventional add-on. The new plot, missions, enemies, end boss, guns, utilities and dozens of new hats – of course! – blend seamlessly into the game. This means that, aside from starting afresh, you can pick up earlier save profiles, discover the history of Fen, and add the character to your roster pretty much immediately. And what an addition it is!

“Fen’s got some really fearsome firepower and clever upgrade mechanics that turn kills into own health and massive damage to others,” says Image & Form CEO Brjann Sigurgeirsson. “Busting up metal has never been this rewarding!”

Outside of The Outsider, April 28 also sees a substantial free update to SteamWorld Heist itself. Players that prefer to have their steam-driven robots speak in French, German, Italian, Spanish or Russian will be happy, and due to popular demand we’ve also expanded the inventory a bit – now you have more empty slots from the outset, and getting new slots will be less taxing on your water reserves. And there’s more utilities. Oh, and even more weird hats.