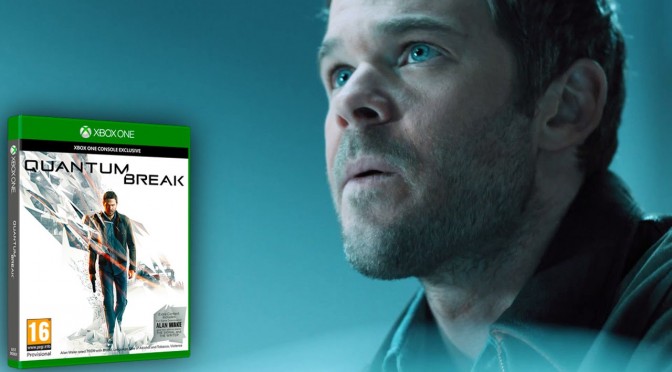 In collaboration with GRA for PEGI and Consumer Information, here’s our Quick Guide for Quantum Break.

1. Genre
Quantum Break is an action adventure game in which the player takes on the role of Jack Joyce, who gains time manipulating powers after an experiment goes wrong.

The game is played from a third person perspective and is built around shooting while using Jack’s time powers offensively and defensively, slowing down bullets in mid-air, freezing opponents, dashing forward and so forth. The breaking down of time causes hazards which the player has to work around, as well as puzzles which need to be resolved using Jack’s powers. The game has an episodic structure, a strong narrative element and is strictly single player only.

It’s similar to Max Payne and Alan Wake. The time altering mechanic is reminiscent of Prince of Persia: Sands of Time.

2. Story
The game is set at Riverport University, where a time travel experiment goes wrong giving Jack and his nemesis, Paul Serene, different time related powers. Jack and Paul are played by X-Men’s Shawn Ashmore and Game of Thrones’ Aidan Gillen respectively, and the story is fleshed out by four twenty minute live action TV episodes, which will stream in between the playable ‘episodes’ of the game. These boast a good supporting cast including The Wire’s Lance Reddick and Lost star Dominic Monaghan as Jack’s brother. The TV episodes can be skipped if you’d rather stick to the action.

3. Developer
Remedy Entertainment are best known for the action games Max Payne and Alan Wake, both of which combine third person shooting with a reality-manipulating special power.

4. Format
Quantum Break is exclusive to XBox One and PC, costing around £40 or $60. Pre-orders via the XBox store will also include a digital download of the XBox 360 versions of Alan Wake and its expansions, which are playable on XBox One.

5. Duration and Difficulty
Quantum Break is likely to last around eleven hours to complete, although inexperienced players and secret hunters could take longer to finish them. Quantum Break’s accompanying TV series is made of four, twenty two minute episodes, so that will add another hour and twenty minutes to the experience.

6. PEGI Rating
In the UK and Europe, PEGI rates Quantum Break 16 for frequent scenes of strong violence and strong language.

Quantum Break includes live action episodes with the game. As these episodes are considered to be integrated with the game’s storyline they are covered by the PEGI rating rather than a separate rating by the BBFC. As such they reflect the same level and nature of violence.

7. GRA Consumer Information
The Games Rating Authority expand on their PEGI details by saying that ‘violence consists of close quarters combat and characters shooting at each other with a variety of firearms’ and that ‘between the live action scenes and computer generated scenes, the violence looks very realistic with blood and injuries depicted in detail.’ The GRA also says that ‘bad language is frequent’ including ‘fuck and its derivatives’.
http://gamesratingauthority.org/pegi/search_aci.html

8. Themes
Quantum Break has been described as a story about destiny, and with trailers showing Jack visiting the grave of his brother the game features a strong theme of grief, with the redemptive possibility that the collapse of time will allow Jack to change history.

The collapse of space-time is a strong thematic hook for a game, introducing a dose of speculative quantum physics into the story as well as creating disturbing, reality warping effects. The result is a shooter that is strongly character driven with some heavy ideas about choice and responsibility at its heart.

The use of Jack’s time powers can create a sense of cold blooded violence as Jack freezes his enemies in time then kills them, the bodies dropping as time resumes. However, the game keeps the playing field fair by outnumbering Jack to keep the player on their toes.

9. Why people play:
With Max Payne’s use of bullet time, and Alan Wake’s juggling of light and dark, Remedy have a long track record of shooting games with an unreal element that leads to clever, complex and cinematic action. Quantum Break pushes this pedigree further, with well-known actors and a built in TV show as well as smart gunplay that requires the player to juggle Jack’s time-twisting power set. Production values for both game and live action are high, and the jump from in-game graphics to live actors isn’t as jarring as it could be.

In a gaming landscape where science fiction usually means blasting aliens in the corridors of a space ship, Quantum Break promises a more thoughtful type of low SF which stays closer to reality both in setting and emotional content, while still delivering fast paced action.