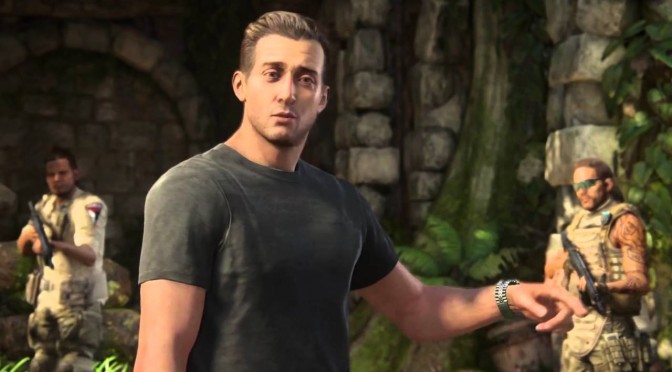 Parents’ guide to Uncharted 4 A Thief’s End in collaboration with the Games Rating Authority.

Uncharted 4 is an action adventure where Nathan Drake, a modern day treasure hunter descended from Sir Francis Drake, gets into violent adventures in search of mystical relics.

The main single player game is played from a third person perspective and combines exploration, jumping between platforms, simple puzzle solving and action sequences where Drake fights enemies both hand-to-hand and in hectic gun battles. A separate multiplayer mode features both competitive and co-operative matches in contained arenas, with players using conventional and mystical weapons.

Characterisation and actor performances are a big draw of the game, these weave storytelling both in cut-scenes and during exploration or action. This creates a strong affinity between players and the characters they control.

As a modernised Indiana Jones, Drake draws inevitable comparisons with Lara Croft and the Tomb Raider series, though the heavily cover-based gunplay is closer to the third-person shooting of Gears of War. The tone is more tongue-in-cheek Sunday matinee than serious calamity survival.

In the UK and Europe, PEGI rates Uncharted 4 as PEGI 16 for Realistic Looking Violence.

The GRA expand on their PEGI details by describing the violence as frequent, realistic and against human characters. The GRA states that ‘Characters may fight with bladed weapons, guns or just with their hands. They react realistically to violence and injuries and blood can be seen.’ Mild swearing like ‘crap’, ‘shit’ and ‘ass’ can be heard, while online play brings players into contact with others online.
http://gamesratingauthority.org/pegi/search_aci.html

After three previous games in which he found and lost the treasure he’s seeking, Nathan Drake has finally settled down in respectable domesticity. When his long-lost brother Sam comes back into his life Drake is drawn out of retirement and into the search for a long lost pirate hoard.

Naughty Dog have developed all the Uncharted games as well as The Last of Us and the Crash Bandicoot series.

Uncharted 4 is a Sony exclusive, available only on PS4, and costs around £40 or $60. A PS Plus account is required for online play.

Uncharted games have main campaigns lasting between eight and eleven hours, dependent on player ability, rising to up to twenty hours to find every secret. Uncharted multiplayer has been extremely popular so could extend the lifespan of the game considerably longer as server’s remain lively.

The Uncharted series’ themes are those of straightforward adventure fiction: the loyalty between good guys, the need to defeat the bad guys, and the struggle between normal life and the call to adventure. While A Thief’s End promises to go to darker places than previous instalment, these themes remain the same, with Drake torn between a peaceful life with his Elena wife and adventure with his potentially nefarious brother and father figure Sully.

As in other action fiction, there’s a tension between the warmth and humanity of the hero characters and the mercilessness of some of the violence: Drake can be quite charming with his quips, but he’s also a white guy who runs around exotic places gunning down hundreds of people, often neither white nor English speakers. Add this to the stabbing, spilling of blood and neck snapping and there’s a danger of the violence eclipsing coherence of both the entertainment and starring characters.

Though it touches on mystical themes with the dangerous artefacts Drake searches for, the series adopts the same agnosticism as the Indiana Jones films it draws from – the artefacts of many different faiths ‘work’, but the story doesn’t take a side. There’s also usually an element of pseudo-science to each macguffin, suggesting that the unusual events might be lost science or unknown natural phenomena rather than magic.

The Uncharted games are blockbuster adventure romps with spectacular action scenes, exotic places and strong stories delivered with great dialogue and acting. They’re a lot of fun and high-end entertainment, even if the frequent pauses for cover-based gun battles can sometimes become more of a slog than a joy.

Uncharted 4 offers more of the same, with an extra level of character angst and, as the title hints, a possible end to the series. Like his predecessors Professor Jones and Ms Croft, it’s hard to imagine Drake’s supposedly final adventure being anything of the sort.