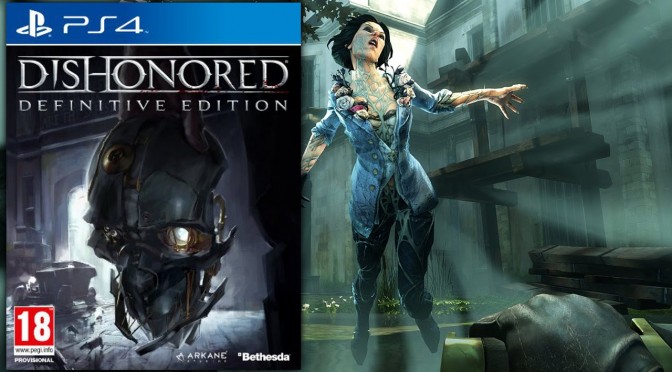 1. Genre
Dishonored is a first-person stealth action game. You play as an assassin with targets you can either kill or deal with non-lethally.

The focus on stealth means each mission can be approached in different ways: sneaking around guards or killing them silently (or loudly); using unlockable magical abilities to teleport short distances or possess rats and travel in their bodies. The world responds to whether you use lethal force, for instance with more rats running around if you leave a lot of corpses, and you also get a different ending depending on how you played.

With its different ways to approach each mission, Dishonored is similar to games like Thief and Deus Ex.

2. Story
Dishonored is set in a fictional city called Dunwall, which is similar to industrial cities in Britain in the late 19th century, albeit with some magical elements. At the start of the game the Empress is assassinated and the protagonist, Corvo, is framed. Corvo must escape prison, rescue the Empress’ kidnapped daughter Emily, and take on those responsible.

3. Developer
Developer Arkane Studios also made RPGs Arx Fatalis and Dark Messiah of Might and Magic, and helped out with level design on BioShock 2.

4. Format
Dishonored was originally released on PS3, Xbox 360, and PC. A version with improved graphics and all the DLC included, called Dishonored: The Definitive Edition, is available on PS4 and Xbox One for around £25/$40.

5. Duration and Difficulty
It takes around 12 hours to finish the main story in Dishonored, though longer for players who want to collect everything, and four or five hours for each piece of DLC.

There are multiple difficulty settings and the difficulty can be changed at any time, so players of different skill levels should be able to find a level that suits them.

6. UK Rating
In the UK and Europe, PEGI rates Dishonored as only suitable for those aged 18 and older for extreme violence; multiple, motiveless killing; violence towards defenceless people; and strong language.
http://www.pegi.info/en/index/global_id/505/?searchString=dishonored

The GRA expands on its PEGI rating by elaborating on the “frequent strong violence and strong bad language”, which includes “strong bloody violence including decapitation, dismemberment and torture, and violence towards multiple innocent civilians”, and use of the “f” word.
http://gamesratingauthority.org/GRA/

7. Other Ratings
In the US, the ESRB rates Dishonored: The Definitive Edition as M for Mature, with content descriptors for Blood and Gore, Intense Violence, Sexual Themes, and Strong Language. It specifies that “players use pistols, crossbows, swords/knives, and grenades to kill human enemies in frenetic combat. Certain weapon attacks result in dismembered limbs, and some environments depict corpses on the ground or hanging from the ceiling.” Stealth kills have Corvo “sneak up on enemies and choke them or cut their throats; these sequences are sometimes depicted in slow-motion with blood-splatter effects.” The ESRB also mentions “sexual references in the dialogue”, as well as use of the “f” and “s” words.
http://www.esrb.org/ratings/synopsis.jsp?Certificate=34026&Title=Dishonored%20Definitive%20Edition

Lobby group Common Sense Media rates Dishonored as only suitable for those aged 18 and older, for “violent moments”, “foul language”, and “some sexuality”.
https://www.commonsensemedia.org/game-reviews/dishonored

8. Themes
Dishonored is set in a world beset by a plague that makes its victims act similar to zombies, and there are rats everywhere, which might be frightening for some people.

The ability to choose whether or not to kill, and the alternative ways Corvo can deal with his targets, raises ethical questions, and the consequences of the path the player takes are clear for them to see.

9. Why people play:
Aside from the world, its history and its characters, what people like most about Dishonored is the ability to choose how they play. Those who enjoy the combat can take a lethal approach, and those who don’t want to kill anyone can play the whole game stealthily and take no victims. Players who like to have choice in their games particularly appreciate that Dishonored shows actual consequences for these choices, both in the state of the world throughout and in how the story concludes.

Some people may even play twice to try the vastly different approaches, so it’s almost like two games in one.