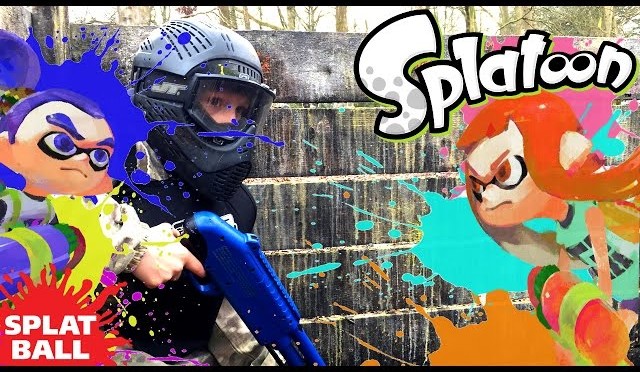 With the Splatoon Wii U demo last weekend we get a fly on the wall look at the Wes and the kids first impressions. I also talk a bit about my son’s birthday party in the woods playing Splat Ball (as opposed to Paint Ball).

As the release of Splatoon approaches, Nintendo have rolled out a time limited testfire demo for Wii U owners across the globe to sample the gameplay and put it’s online capabilities through a thorough test. The demo features two maps, Walleye Warehouse and Saltspray Rig, with four weapon choices for your splatooning fun. In the included Turf War mode, two teams
of four let loose to pepper the map with as much paint as they can muster. The eventual winners are the team who’ve covered the most of the map in their colour, while individual players get bragging rights for taking out as many of their opponents as they can.

The demo features an introductory level to get you used to the mechanics of moving and aiming with the gamepad as you navigate the environment popping balloons and using painted areas to test out the swimming capabilities of your alternative squid form. Once complete, you’re pitted against players from around the globe in with the following weapons at your disposal:

Splatoon is shaping up to be a fun, family friendly team based shooter for all ages. Check it out on release on May 29th, 2015.