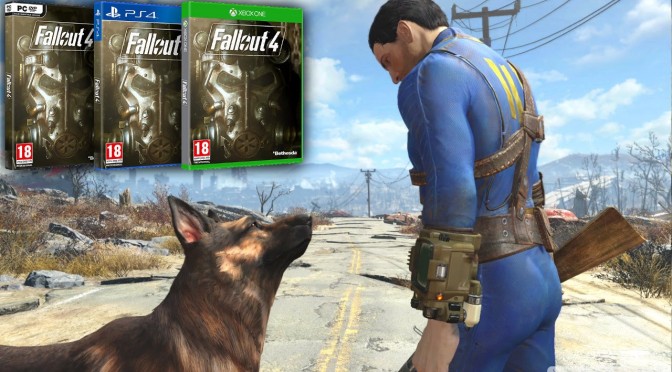 Fallout 4 is an action role playing game in which the player controls a survivor of a nuclear war, emerging into a post apocalyptic world 200 years after the bombs fell. Viewed from either first or third person perspective, the game is about exploration, meeting other characters and engaging in combat with human and mutant enemies. The Fallout series allows a great deal of player freedom, and this instalment has greater levels of customisation and crafting than ever before, allowing the player to solve problems in many different ways.

Fallout 4 is, naturally, a successor to Fallout 3, but also slots into the post apocalyptic genre prominent in games like Metro Last Light and Mad Max.

The game opens the day the bombs drop in 2077, with the player character fleeing to Vault 111 with their baby son. 200 years later the player, known as the sole survivor.

Many, many side quests can take the player away from the main storyline, and the sole survivor encounters familiar factions such as the Brotherhood of Steel, ghouls and Super Mutants. The survivor can also recruit a dozen companion characters to their cause, as well as Dogmeat, a pet dog who can help sniff out resources and fight enemies.

Fallout 4 is available for XBox One, PS4 and PC, and has a retail price of around £55. As a single player game a subscription to Playstation + or XBox Live is not required. Downloadable expansions will follow, with a Season Pass covering all the DLC on sale for £25 or $30.

Fallout 4 offers around 24 hours of gameplay in the main campaign alone, although length will depend on player ability and how deeply areas are explored. A full exploration of the game could stretch well over 50 hours.

Fallout 4 is rated PEGI 18 in the UK and Europe due to frequent strong violence.

The Games Rating Authority expand on their PEGI details, saying that ‘players can decapitate and dismember enemies with various firearms, explosives or melee weapons, all with associated blood and gore. As in Fallout 3, players can use a targeting system which will depict this violence in slow motion. Bodies remain on the ground and can be mutilated further post-mortem. Some characters are restrained and defenceless against the violence.’ The GRA also states that the game contains ‘infrequent use of the word fuck’.

In the US, the ESRB rates Fallout 4 M for Mature, with descriptors for Blood and Gore, Intense Violence, Strong Language and Use of Drugs. The ESRB states that ‘a handful of scenes depict chunks of flesh as well as severed heads and dismembered corpses.‘ The game also features the words ‘fuck’, ‘shit’ and ‘asshole’ in dialogue.

Fallout 4 delivers a common formula from previous Fallout games of bleak post apocalyptic survival, explosive violence and jet black humour. The announcement trailer reminded players that ‘war, war never changes’ with the conflict between the Brotherhood of Steel, the Institute and other factions guiding the storyline. Playing a character who remembers the pre-war world as opposed to a lifelong vault dweller introduces a fresh viewpoint on the wasteland, as does the fact that your character speaks rather than being the strong, entirely silent type, while the search for your son adds a strong theme of family.

Very few games on the last generation of consoles provided such a sense of freedom and haunting feeling of loneliness as Fallout 3, and Fallout 4 delivers even more flexibility to explore and interact with the radioactive wasteland and its inhabitants. Combat utilises a dazzling array of weapons, while settlement building provides long term objectives and the opportunity to romance human companion characters – no Super Mutant love for you, I’m afraid – provides freeform depth outside the central storyline.

The Fallout universe’s future, extended as it is from an imaginary endless 1950s cold war rather than our own present, has always been a beguiling combination of survivalist grit and mid twentieth century retro futurism. What other game this year will give you the chance to don a brightly coloured jump suit – or any other clothes you can find – wield a laser weapon and explore the wastes while listening to period be-bop tunes?