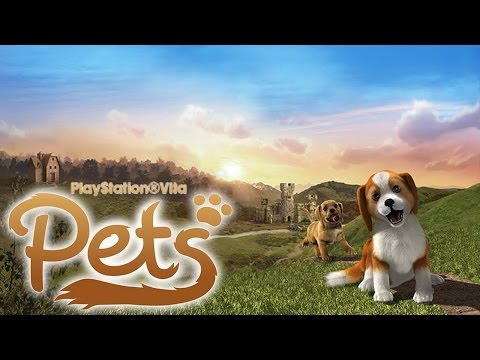 They say that a dog is for life, but the problem with pet sims is that they don’t seem able to encourage that message in many of their players. From Neopets to Nintendogs, I’ve had many a virtual pet that I cared for dutifully for several days or weeks before forgetting about it, and I don’t think I’m alone. There’s a big difference between a dog that jumps up at the window when you get home from school or work and one that goes away when you close your DS.

PlayStation Vita Pets escapes this dichotomy by being more of a pet adventure game than a pet sim game. Vita Pets shows that it’s a different breed from the very start of the game, as the dogs available for adoption recite mini speeches to try to convince you to pick them over the others on offer. This also serves as an opportunity to highlight the different personalities of each of the breeds, which don’t seem to have an effect on their behaviour but do come through in their different voices and tones.

Personally, I found the voices annoying, particularly the overly gendered Dalmatian with its, “I’m so cute and I love shopping!” but younger players will just find them similar to a typical American cartoon character. Besides, if the dogs didn’t talk there would need to be a separate narrator to tell you what to do, which seems like an unnecessary addition. This way, it’s just you and your dog, off on an adventure together.

The story behind that adventure might not be particularly deep, but suites a young audience well. And the introduction betrays significant care on the part of the developers, told as it is through a papercraft-style animation when you open a particular book on the shelves of your dog’s new home. It tells the story of a king and his canine best friend, introducing a mystery that you solve by following the treasure trail they’ve left behind.

It’s a quest, in other words, and one that transforms this pet sim into a roleplaying game. The first clue may be right outside the back garden, but to get there your dog will need to open the gate, and for that they’ll need to level up their tug strength with a tug toy purchasable from the Smart TV inside.

The level of guidance you receive when faced with barriers like this varies — and I actually got stuck quite far along the treasure trail when it turned out I needed to teach my dog how to jump but had no idea how — but the sense of progress has been well engineered. You explore until you come across a barrier, then return home to level up whatever skill your dog needs to surpass it. Along the way you may want to dig up buried treasures such as clothing items for your dog, and when you return home you may well want to give it a drink or a shower, but those are unnecessary side activities added to round out and slow the pace of the game.

Of course, the quest does eventually have an ending, though it’ll likely take a good few hours to get there, and at that stage players may feel that the game has little to offer over what you get from a traditional pet sim. But while feeding and showering your dog may not be much of a draw, teaching it tricks with the voice recognition, bringing it into your world with augmented reality, and using the intuitive touch controls (the entire game can be played with just the touch screen and your voice) to play fetch are still pretty fun. Besides, the world of forests and mines and castles waiting outside that back gate is so well realised that even when the adventure is over you may find yourself going back for another look. Content supported by Sony, including access to the game.