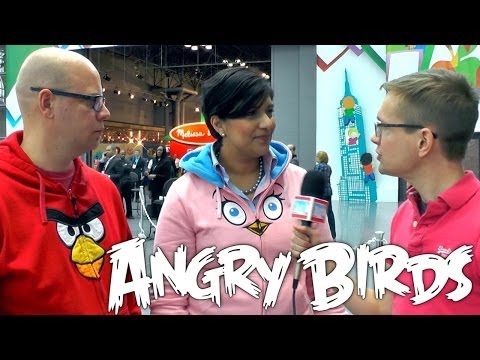 Stella is the new girl friendly Angry Birds game from Rovio. Combining physical toys and virtual play it may sound like Skylanders, in fact Rovio is more focused on broader entertainment competitors with TV show and consumer products to boot.

Angry Birds is one of those video-game phenomenon that has escaped the cultural refines of the gaming clique and spread its wings in the wider world. Most people have heard of Rovio’s pigs and bird characters.

Less well known is the company’s plans to move from being a mobile game creator to an entertainment outfit offering consumer products, cartoons, books, films and even activity parks.

At this year’s New York toy fair I caught up with Naz Cuevas, Head of Rovio Consumer Products Licensing, and Jami Laes, Executive Vice President Rovio Games to find out what’s next for the Angry Bird franchise.

Those who follow the toy-video-game cross over space closely will be aware that Angry Birds has recently entered this space with their Telepods technology. Like Skylanders and Disney Infinity this enables players to access in game characters by scanning a physical toy into the app.

While Telepods certainly plays to this “toys to life” genre Laes was keen to distinguish it from the Activision or Disney games. “It’s a more accessible price point, it’s more collectible and it’s something you can take with you in your pocket just like your smartphone. We have a digital physical integration for the mobile generation rather than on consoles.”

Official blurb: “Yesterday we told you about Stella and her close-knit group of friends embarking on new adventures in never-before-seen parts of the Angry Birds universe. Stella’s story will be told through games, animations, books, toys and other fun stuff. Speaking about toys, something you will get your hands on later this year are Angry Birds Stella Telepods from Hasbro!

These new playsets and figures will expand the Angry Birds Stella adventure in both physical and digital worlds – basically, they’re fun toys that also work with our games. How do they work exactly? Here you can see the Angry Birds Star Wars II Telepods in action!

We can’t say much more at this point, but we think you’re going to enjoy the reveals that we’ve got lined up for our tumblr page at stella.angrybirds.com, including news on the upcoming game and more.”