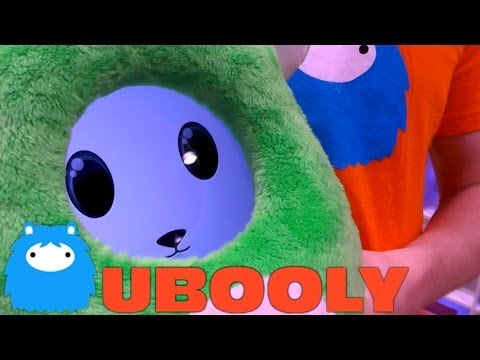 We have recently been checking out Furby Boom, but at the other end of the interactive Plushy spectrum is Ubooly. Rather than big corporate backing this product comes from a successful Kickstarter and has more ethical and educational aims than some of its more commercial counterparts.

First off it’s a much cheaper product than some of its counterparts, something that is achieved by using your iPod Touch, iPhone and iPad as the electronics rather than selling you a plush with its own internal circuitry.

You place your Smartphone or Tablet in the big soft Ubooly plushie and it becomes the brain, face, ears and mouth of the creature. The result is impressive and matches other products for both the endearing quality and production values.

Interestingly, even without the touch sensors of Furby, Ubooly manages to create a tactile interactive relationship with the child (or older) player. It leverages the extra horse-power of the Tablet to achieve relatively reliable speech recognition, which again underlines the interactive side of the toy.

Unlike Furby, Ubooly talks using English (or one of the six different supported languages). This means that instead of the cute Furblish statements of Hasbro’s product (which you can translate with an app) Ubooly can tell stories, encourage play and generally trigger the child’s imagination.

This is Ubooly’s biggest benefit and challenge. Without having played with (or watched your child play with) the brightly colored plushie it is hard to appreciate how unique a play scheme it creates. Through intelligent writing and engaging spoken scenarios Ubooly soon has children imagining their bed is a pirate ship or charging round the house to escape the rampaging pirates.

At Toy Fair Ubooly also had a new physical story book on display. These books could be read with a child by a parent, but also come with a token to trigger Ubooly to read the book with them.

The experience shouts independent developer at every turn and this is a breath of fresh air in the crowded commercial toy market. With a constant stream of new content for Ubooly from the team, without the usual hook to buy more and more paraphernalia this is a very strong offering for families with younger children.