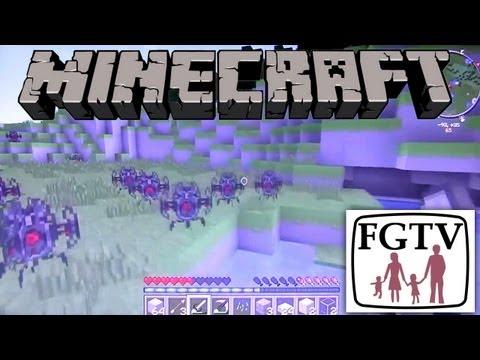 The final video of our three Minecraft shows, addresses how texture packs change the game world. After a quick tutorial on how to do this through the in game tools, we jump in. None of these alter the game, but do change the look, so their appeal is dictated by the player’s tastes and interests.
First we tried Precisely Portal (http://www.resource-packs.com/precisely-portal-and-modified-portal-resource-pack/), which takes its inspiration from the videogame Portal. This adds an almost laboratory like sheen to the world, with clinical white walls.
Minetroid (http://resourcepack.net/minetroid-resource-pack/) mirrors the Nintendo classic title Metroid. This creates a dark world, with neon items, and new enemies, making a slightly more intimidating environment to explore.
With a Naruto fan in the house, Naruto Craft (http://www.planetminecraft.com/texture_pack/narutocraft-1-naruto-texture-pack/) seemed an obvious choice. Initially rather bland, its appeal grew as it became clear the blockier colours of the world was intended to make it look more like a cartoon.
Our last texture pack was Sixty Gig Alpha (http://www.curse.com/texture-packs/minecraft/sixty-gig-texture-pack-alpha-bui), which increased the detail of the world, while making it cartoon like. More detailed trees and grass didn’t capture the imagination like some packs based on popular franchises, but did look nicer than the base game.
Finally we wrap up with a warning about who should look for any of these different add-ons, as their third-party nature means that they are funded by a variety of adverts that could contain all manner of images.