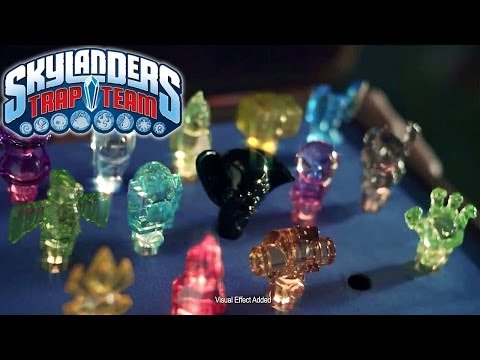 Let’s talk Skylanders Trap Team and ponder over a number of questions that are currently unanswered and point out a few details you might have missed. We also have some in-game footage for you that showcases some of the awesome abilities of the new Skylanders.

Activision and Toys For Bob return with the fourth installment of the Skylanders franchise, Skylanders Trap Team. Trap Team features 16 brand new Trap Master Skylanders and 18 new core Skylanders who are on the hunt for escaped villains from Cloudcracker Prison.

All of your existing Skylanders, plus the new Trap Team Skylanders have the ablity to trap defeated enemies in crystal traptanium traps which then allow the you to play as those same captured enemies at any time. Traps are slotted into the all new traptanium portal to allow the player to both capture and release fallen foes. You’ll even be able to hear your captured enemies talk to you directly from the traps when connected to the portal.