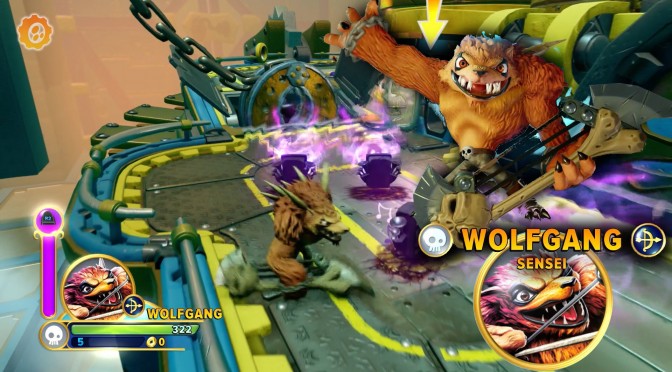 We get to play through the later levels of the campaign we saw at reveal.
– Main Hanger
– Main Deck
– Engine Room
– Shock Cannon Control

More than that though we have new Skylanders in the form of:
– Wolfgang
– Ambush

Wolfgang wasn’t always a werewolf.  He was once a handsome, brilliant musician set to marry a beautiful princess.  Before the wedding, he planned to unveil his ultimate symphony to all the greatest music aficionados in Skylands, convinced they would love it and instantly hail him as the best composer ever.  But they didn’t.  They hated it – and even worse, it actually hurt to listen to.  He had unintentionally discovered the musical note for pain.  Being shunned like this drove Wolfgang utterly and completely mad, physically transforming him into the werewolf he is today.  With the princess no longer wanting to marry him, he turned to a life of crime, terrorizing the royal subjects and using his evil music as a weapon.  The Golden Queen took note of this and realized that Wolfgang could make a powerful ally, if she could control his rage and keep him in line. But when they were both captured by the Trap Masters, Eon gave these two Super Villains a choice – either go back to a newly reformed Cloudcracker Prison or become Skylander Senseis, teaching a new generation of Imaginators their formidable battle skills as well as how to stay clear of a life of crime. They accepted the deal but first had to prove themselves by re-arranging all the books in the Academy’s library, a task which took almost two years, almost driving Wolfgang mad again. But he got through it and realized he could earn more respect as a Sensei training the Bowslinger Class than he ever could as a musician.