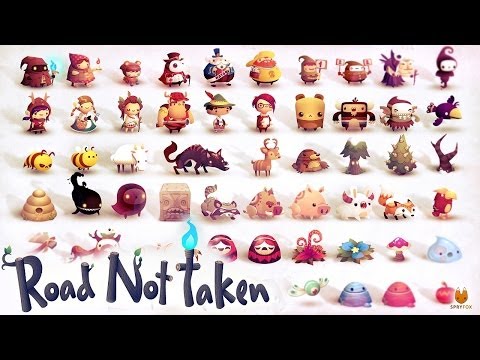 Alex Jaffe, Developer of Road Not Taken, talked us through some levels of Raod Not Taken.
He described the game as “a Roguelike puzzle game based on the poem by Robert Frost. It’s got survival and procedural elements but the core of the game is a grid based puzzle game.”

In Road Not Taken you controls a mysterious hooded character who enters a small town to rescue lost children. This is done by progressing through the grid based world and using items to solve puzzles.

“You play through 15 increasingly difficult years. The villagers develop over that time. The narrative twists depending on who you spend time with or give gifts too. Characters fall in love, can get married, jealous, sick or even die.”

“One of the major themes of the game is that you are an outsider who tries to build relationships with these people who all have traditional basic family values, but you can’t have kids yourself in the game.”

Road Not Taken will be available later in the Summer on PlayStation Vita, PlayStation 4 and Steam for Mac and PC.