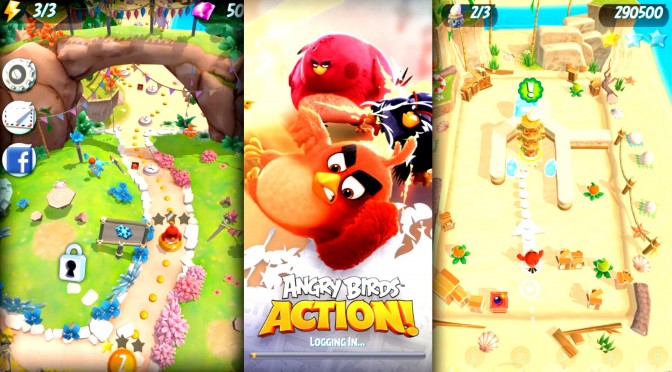 Just when you think it’s safe to return to the skies, those pesky Angry Birds return with another new game and new style of gameplay to capture your attention. While this isn’t as big a diversion in gameplay as the likes of Angry Birds Transformers or Angry Birds Epic, it’s definitely a whole new Angry Birds experience which continues the familiar bird flinging antics that the games are well known for, but melds them into a fast and furious arcade-style smash-em-up.

Each of the 90 Angry Birds Action! levels are more akin to a destructible pinball table than they are the levels we’re used to in the original game and many of the spin-offs. The viewpoint is very much the kind of tilted top down view you’d expect from something like Zen Pinball, but rather than having a ball in continuous motion, here you take turns to fling Red about the level, smashing various obstacles as you strive to save eggs and collect valuable items.

Chuck, Bomb and Terence are also playable in the game and along with Red, each character is modeled the version found in the upcoming Angry Birds Movie, due out later this year. Each character also has their own unique abilities to change up the gameplay, but as far as we can see, there’s currently no way to play as other well known characters, like Stella, Matilda or The Blues, but maybe we’ll see them in a future update.

Angry Birds Action! is currently available for free in the New Zealand appstore, ahead of a global launch later this year and comes with all the in-app purchases you would expect from a game of this type. Gems can be bought for various prices, up to a lofty £54.99 for 3000 gems. These can be spent on keys to unlock gift crates and we suspect also on various powerups (aim extender, invisibility, ghost bird and more) to aid you in the trickier levels.