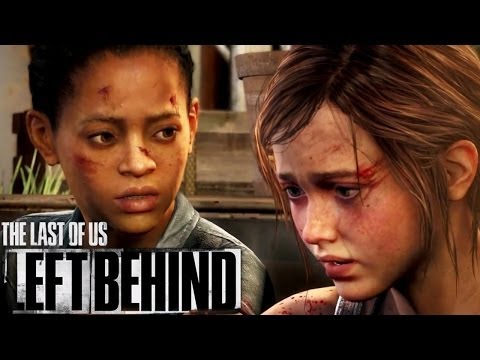 One of my favourite parts of The Last of Us is winter. The last thing the player has experienced is Joel seriously injured, and then time skips forwards. At the beginning of winter, you take control of Ellie. The roles have reversed, and now she is the protector, looking after Joel as he slowly recovers. This moment was memorable for me not only because I got to play as an interesting female character but because it explored the relationship on which the game is focused from the other side.

The first piece of single-player DLC for The Last of Us is about relationships too. In it, you play as Ellie throughout but in two different timelines. One fills in some of that gap between autumn and winter in the original game, as Ellie searches a mall for supplies with which to deal with Joel’s injuries. The other timeline takes place in another mall, before Ellie meets Joel for the first time, and tells the story of a different relationship: that with her best friend Riley whom she mentions at the end of the game.

Given that Joel is unconscious in the first timeline, that part of the DLC is less about their relationship — though the flashback-style switching between timelines suggests you’re supposed to draw parallels — and more of an excuse to include some combat. It both gives more mechanics-driven players a reason to play the DLC and provides a balance with the other timeline, in which there is very little in the way of combat at all. Instead, the slightly younger Ellie spends her time exploring the mall with Riley, talking to her, interacting with objects, even playing games. Though much of the story is conveyed through cut scenes, the player’s actions echo the changes in Ellie’s mood and tell the story of this relationship.

In this extract of her life, Ellie hasn’t seen Riley for six weeks, and as such their reunion is intense. At first, Ellie is annoyed with Riley for having left without telling her, and for waking her up to insist that she sneak off with her. The suggestion of danger that doesn’t arrive as they start to explore creates a tension that emphasises this mood.

As they come across things like photo booths and carousels, the mood shifts. As the player gets to pick options for poses in the photo booth and take part in a brick-throwing, window-smashing competition, Ellie is clearly also lightening up. She can’t help but enjoy Riley’s company. They talk, they relax, Riley puts on some music and they dance. Ellie begs Riley not to leave again, and kisses her. It’s impulsive, and obviously not something they’ve done before. It’s plain that Ellie cares deeply about Riley, and is acting on those deep emotions stirred up by the possibility that she might never see her again.

Those who paid attention at the end of The Last of Us will know how this story ends. The music attracts infected, and Ellie and Riley run for their lives. This is the closest the action gets to that in the other timeline, though here it’s panicked speed rather than sneaking about to quietly take out bandits. It looks as though they’ll escape, and then they are set upon. Suddenly, the infected are dead, and Ellie and Riley have both been bitten. With the threat gone, they are left to face each other and their fates. They decide, as Ellie will later tell Joel at the end of the game, that rather than take the “easy way out” and kill themselves with Riley’s gun, they’ll stay alive for the sake of having however much time they have left to spend with each other.

Like The Last of Us, the Left Behind DLC is about the human need for other people. Riley and Ellie need each other — Riley tells Ellie that she is the only one who can make her stay rather than go away with the Fireflies, and Ellie fights with her judgment that she should let Riley do what she wants and ends up begging her to stay. As with The Last of Us, the ending to their story involves a decision based on love rather than logic. Joel lied to Ellie and potentially harmed the fate of mankind because he cared about her. Ellie and Riley decide not to take the rational step of ending their lives before they succumb to the infection because they want more time together.

Just as Joel’s decision will make players wonder what they would do in his shoes, the ending of this DLC will make you think of your loved ones. Anyone who’s been in love, particularly if you’ve faced the possible or real loss of a loved one, will respond to this last scene. This is mature gaming that doesn’t rely on blood and gore to seem adult but considers grown-up issues and creates grown-up emotional responses. For that, though it’ll only take you a few hours to play, it’s definitely worth it.