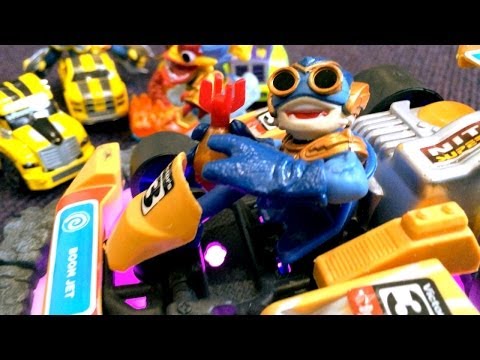 It seems reasonable to assume that, in the fourth year of the franchise, Activision will want to change up their game this year. Also with more competitors in the market to continue in predictable fashion offers the chance thunder to be stolen.

However, looking at the Toy Fair 2014 details (although they are numbering the stands differently a little investigation revealed that) Activision are booked in for 2014 in the same size as position as they had in 2013. This is in the “Action Figures, Electronic Toys and Video Games” categories at the show.

This inevitably brings us to the question of what Skylanders 4 will offer players. While there is no solid news about the game’s content, beyond CEO Bobby Kotick’s confirmation that he “expects to launch new Call of Duty and Skylanders titles [in 2014]”, we can actually tell quite a lot about it.

More clues are likely to be found on the desk of Robert Leyland. This is the place where the original portal came into being, along with the discovery that it could power light up Skylanders figures — the Light Core versions that are now commonplace.

The new portal can work with more complex RFID (Radio-Frequency Identification) information and no doubt opens up all manner of new possibilities. In the same way that the Light Core figures used existing hardware to create a new experience I suspect that Leyland will pull a similar trick for Skylanders 4.

The Swap Force ability to have toy parts combine and communicate makes it possible to offer more diverse customizations that span both the physical and virtual world. It’s therefore not a big leap to imagine Skylanders with physical weapons and upgrades that you can attach with magnets like the Swap Force snapping.

Snapping the top half of a Swap Force character into a vehicle also makes sense not only from a video-game mechanic, but also for physical play on the living room floor, as does snapping on weapons like children have done for years with Star Wars figures — a commonly referenced touch stone by CEO Eric Hirshberg when discussing the game.

Add all this to the recent success of Angry Birds Go! kart racing and the more diverse experience offered by Disney Infinity and it seems likely that Skylanders may move to offer a more varied adventure this year, or perhaps opt for a series of spin-off style games rather than one big new adventure. Skylanders Zoom (insert similar racing themed post-fix here) would certainly we popular in my family — particularly if placing different Skylanders 4 figures in the vehicles offered different weapons and abilities.

Adding more fuel to this fire is the existence of toy cars on developers desks at Toys for Bob during a previous visit. At the time of the interview with I Wei Huang Giants was just finished and it would have been when they were getting ready to develop this next game.

Skylanders Dice (as I like to thing it would be called) may not be likely but shows the wide ranging options Activision have with the franchise. The challenge must surely be around which ideas to take forward rather than coming up with something new. Here again we find another clue about Skylanders 4, which will likely gravitate to the simpler and more robust ideas rather than the fantastical — on cost basis if nothing else.

Whatever the next game brings some things are certain. We won’t be seeing new elements as this would dilute the existing range of toys and make the series too complex. We won’t be needing a new portal this year, as this would be too much of a stretch two years in a row. We will be able to use all our old core, light-core, giant and swapper Skylanders in the new game. We will see new core and light-core characters along with series 2, series 3 and series 4 re-posed figures — this may well be the moment the Giants get reposed and their own Wow Pow attacks.

Also as in previous iterations we will see a new color of base to distinguish the characters. After green for Spyro’s Adventure, orange for Giants and blue for Swap Force I’m guessing it will be yellow for Skylanders 4. Not only is this another bright color but I also spotted some yellow based (series 4) Skylanders on I-Wei’s desk when I interviewed him.

Time will tell and soon separate fact from fiction. Provided Activision can continue to balance creativity and value for family gamers with this highly profitable franchise I suspect it will consolidate in 2014.