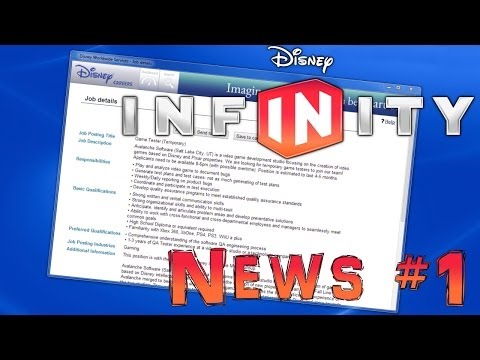 An Avalanche Software job listing suggest that Disney Infinity 2 will release this year on Xbox One, Xbox 360, PS4, PS3 and Wii U but not on Wii.

As we approach the time of year when new toy-video-game cross overs are traditionally announced it’s not surprise to find the internet full of rumors of Skylanders 4 and Disney Infinity 2. But today I stumbled across a forum post that was more fact than fiction.

A job listing for a temporary Game Tester position at Disney Infinity developer Avalanche Software seems to leak some information about the follow up game.

Firstly the post lasts around 4-5 months which would suggest a crunch time leading into the third quarter of 2014. This could indicate a release date for Disney Infinity 2 around August, similar to last year.

Secondly the listing only includes Xbox 360, Xbox One, PS4, PS3 and Wii U, which forum posters are taking for a sign that there will be no Wii version of the game. This has some credence after a cut down experience in the Wii (that led to some confusion over which version had which features for families).

However there is also no 3DS or Vita technology in the job listing which may simply mean that the development and testing of non-next-generation is simply being handled by another part of the development team.

We should also note that this release looks like it will bring Disney Infinity on Xbox One and PS4. This will be the first time we have seen the play sets and toy boxes of Disney’s world with the high spec visuals and interactions of Xbox One and PlayStation 4. It will be interesting to see how the new Kinect controller is used in the game.

Perhaps more interesting for outsiders on the Disney Infinity collecting craze is to see that this suggests that Avalanche Software are handling another big release for Disney Interactive just a year after the monumental effort of shipping the first Disney Infinity game. Whether this is sustainable over the long term or whether, like Activision, Disney will need to move to a tag-team approach to their yearly releases of the game only time will tell.

Although other details are not at this stage forthcoming (a name or theme for Disney Infinity 2, whether the old figures will be compatible with the new game or indeed whether the old Play Sets will work if you only purchase the second game) it is likely we will hear more from Disney on this very soon.