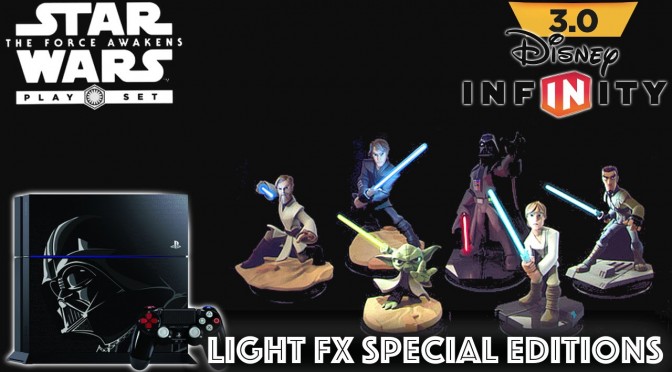 We have a look at the Light FX figures, Fin and Rey from Star Wars The Force Awakens.

Light FX figures will include Luke Skywalker and Darth Vader from the Star Wars Rise Against the Empire Play Set, as well as Anakin Skywalker, Yoda, and Obi-Wan Kenobi from the Star Wars Twilight of the Republic Play Set and Kanan Jarrus from Star Wars Rebels.
Also unveiled recently was a PlayStation 4 Disney Infinity bundle, with a Star Wars branded Dual Shock 4.

Finally we had a look at some more tracks for the Toy Box Speedway game from Sumo Digital, for Marvel with Hulkbuster and Ultron. No Ant Man or Age of Ultron playset but we did get Marvel Battlegrounds four player playset.