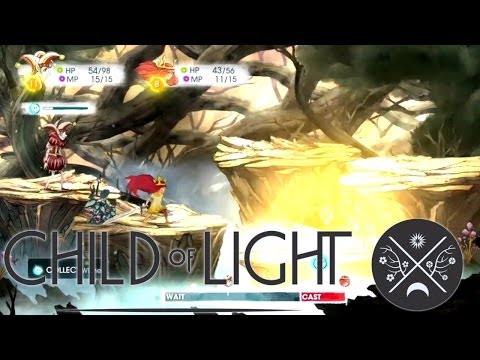 We spoke to Patrick Plourde, creative director at Ubisoft for Child of Light.

We play as Aurora, “an active heroine, no prince charming at the end, focused on the idea that we need to grow up, leave home and take responsibility to make a change in the world.”

The multi-player mode offers a great way for families to play together. “I thought about the co-op mode so that the second player doesn’t need to read. They can just move around freely but are still important and influence the game tactics.”

It was provisionally a PEGI 12 and now is a PEGI 7. “I don’t know why it was initially rated PEGI 12. I think because at first the description of what would happen in the game, it deals with death and abandonment so probably that’s why it was 12 at first. But I can happily bring my [young] son to play at the same time share a unique adventure with him.”

Visually it looks stunning. “I wanted to have a painterly style, I stumbled on John Bauer illustrations that use water colour and ink that really suited our graphics and decided to work with it.”

“UbiArt framework was essential in achieving a game that looked like a painting from a smaller team and to really push the art direction.”

Will it be marketed well? “I am just making the game and I have to let people in charge of marketing do their work. I have to let it go.” How would you describe it to a family? “It’s a wonderful adventure, you are enveloped in a magical world that uses the best of all art, poetry, painting, music and gameplay. You can enjoy it and have a couple of evenings that you are going to remember sharing an adventure together.”