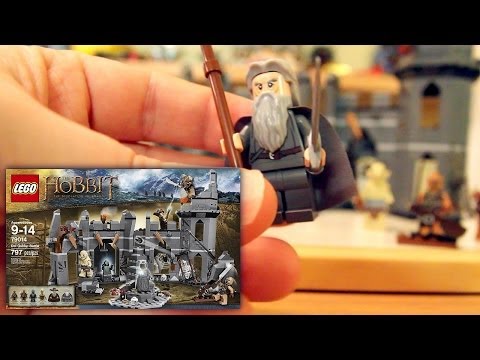 Official Blurb:
“Rumors of the rise of an ancient Evil have brought Gandalf™ The Grey and Radagast™ to investigate the fortress ruins of Dol Guldur. Flick the magical wall to make the sinister Necromancer of Dol Guldur appear to the Wizards. But beware — Azog™ and 2 Gundabad Orcs are about to attack with a rolling catapult. Can the brave Wizards dodge the skulls falling from the turrets and swinging blades and axe, and avoid being trapped in the spider web and hanging cage? Will Gandalf discover the treasures hidden within the statue? It’s up to you to decide the fate of Gandalf and Radagast in this epic battle of good versus evil! Includes 6 minifigures with assorted weapons and accessories: Gandalf the Grey, Radagast, Necromancer of Dol Guldur, Azog and 2 Gundabad Orcs.”