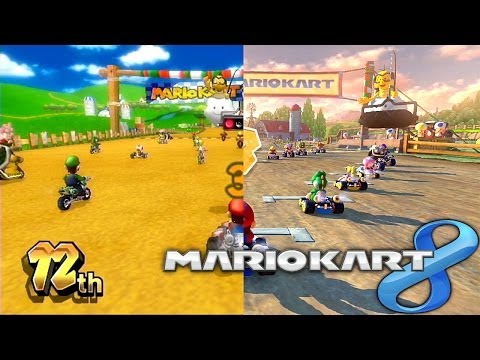 Here’s our 10/10 Mario Kart review and side-by-side Wii vs. Wii U comparison. As you can see the next generation visuals not only impact on how the game looks but also the sense of scale.

After a long time in qualifying we’ve made it onto the grid to take a look at Mario Kart 8, the latest iteration in the long running Mario Kart franchise that started all the way back on the Super Nintendo.

In this video we’ll compare the differences between Moo Moo Meadows on both Mario Kart Wii and Mario Kart 8, discussing the various changes to the game including the new innovations in level design and kart customisation, how the gamepad is integrated and showcasing the graphical differences between the two versions.

Add to its great new graphics the new circuits, power-ups and more in depth handling and this is quite simply the best Mario Kart game since it first appeared 22 years ago.

The most popular entry in the franchise to date was the Wii version of the game, selling a staggering 35 million copies! With Mario Kart 8, Nintendo will be counting on those fans of the game to migrate over to the Wii U, but is it worth the upgrade?

Nintendo blows away even the highest expectations with its surprise best in series Mario Kart 8. Mario Kart 8 offers real driving depth, ambitious innovation and social features to ensure everyone hears about it.