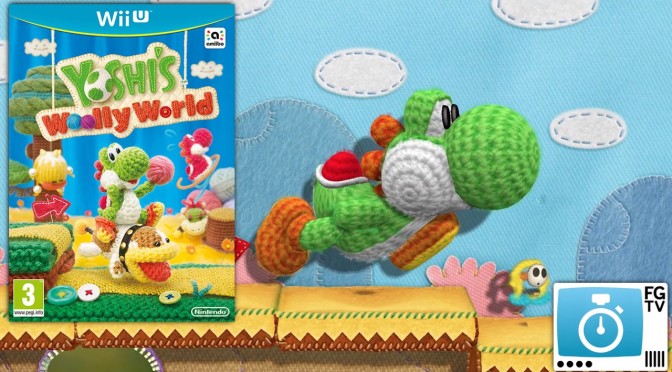 1. Genre
Yoshi’s Woolly World is a side-scrolling platformer for the Wii U. Players are Yoshi, leading him left and right, up and down through various levels made of woolly material. Yoshi can use his tongue to swallow enemies, which then enables him to produce balls of yarn (instead of eggs as in other games) that can be used for things like tying up enemies and filling in platforms.

The world is soft, reacting to Yoshi’s presence, with squidgy platforms and doors that peel back like cloth.

A second player can join locally as a second Yoshi to play cooperatively.

The game is compatible with Amiibo that enable a second computer-controlled Yoshi to join instead of a second player. Three Yoshi Amiibo made of yarn are available, in pink, blue, and green, but players can also use other Amiibo like Mario and Princess Peach to unlock new Yoshi designs.

Yoshi’s Woolly World is perhaps most similar aesthetically to Kirby’s Epic Yarn, but plays like other Yoshi games, like Yoshi’s New Island.

2. Story
Yoshi’s enemy in the game is Kamek, who has turned his friends into yarn. Yoshi must make his way through several stages, defeating enemies, collecting yarn, and rescuing his friends.

4. Format
Yoshi’s Woolly World is only available for Wii U and costs £/$ on the Nintendo eShop.

5. Duration and Difficulty
Yoshi’s Woolly World shouldn’t be too difficult for players with experience with platformers, but for younger or novice players it features a “Mellow Mode” that gives Yoshi wings to propel him through the level out of harm’s way. The mode can be turned on at any time.

6. UK Rating
In the UK and Europe, PEGI rates Yoshi’s Woolly World as appropriate for those aged 3 and older, with no content descriptors.
http://www.pegi.info/en/index/

7. Other Ratings
Use this section to highlight details of the game not already covered by PEGI.

8. Themes
The woolly theme will appeal to those who like craft activities like knitting and stitching, even those who don’t play many games.

9. Why people play:
Yoshi’s Woolly World immediately appeals because of its colourful woolly look, but its simple but satisfying platforming keeps players interested, especially if playing with a friend.