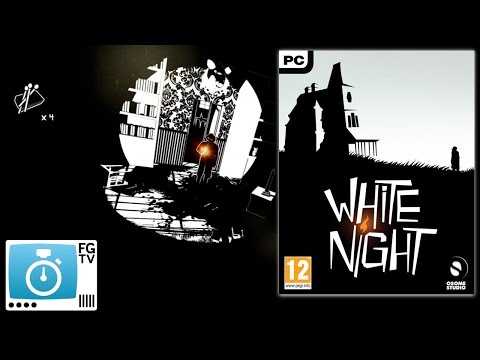 Guide to White Night on PS4, Xbox and PC. From what makes this game great to what to watch out for this is the ultimate guide.

White Night is a story driven puzzle game played from a third person perspective and notable for its stark black and white visuals. This monochrome look isn’t just a visual affectation, as the puzzles in the game centre around the interaction between light and dark. There’s also a strong element of survival horror, where eeking out your resources and caution are as important to surviving the terrors as quick button presses, with a limited supply of matches to provide light.

The use of light sources for protection in White Night is reminiscent of Alan Wake, while the cautious exploration of a ruined mansion full of secrets calls back to the very first Resident Evil, recently remastered to huge success.

2. Story
Set in 1938, White Night opens with your character surviving a car crash and taking refuge in a mansion near Boston. Not knowing whether a woman who ran into the road survived the impact, your character searches the mansion first looking for shelter, but gradually uncovering a mystery, all the while escaping the spectres who lurk in the shadows.

3. Developer
OSome Studio is a new French developer formed to develop mature, story led video-games by veterans of Eden Games, who developed the fifth Alone in the Dark game.

6. UK Rating
In the UK and Europe, PEGI rates the game 12 for frequent mild violence and mild swearing.
http://www.pegi.info/en/index/global_id/505/?searchString=white+night

The Games Rating Authority expand on their PEGI details by saying that the violence in the game is ‘unrealistic with no depictions of harm or injury [and] during an attack the game will fade out to the game over screen which shows a silhouette of a hand holding a knife.’ However the GRA also states that White Night contains some ‘stronger scenes, including a woman pulling a knife from her body, however as with the rest of the game this is depicted in a heavily stylised abstract manner. All gameplay is in the same surreal black and white style and as such there is never any graphic detail.’ The game contains the words ‘whore’ and ‘bitch’.

7. Other Ratings
In the US, the ESRB rates M for Mature with descriptors for violence, blood, sexual themes, language and nudity.
http://www.esrb.org/ratings/search.jsp (Include a link to details.)

8. Themes
White Night is strongly influenced by the earliest game in the survival horror genre, Alone in the Dark, as well as film noir and the jazz music of the 1930s. The tone is deliberately unsettling, avoiding easy shocks in favour of a balance between tension and scares. The supernatural elements of the story, and the predominance of light and dark in the game, evokes lunar imagery while the tone is mature and unsettling as you uncover dark secrets.

9. Why people play:
As horror games have become more action-oriented, many have longed for a return to the slower, more cautious pace of older games. White Night promises a return to the slow building tension and exploration of early Resident Evil games, and finding shelter in a darkened, dilapidated mansion is a classic premise.

The stark monochrome visuals and jazz age setting also lend White Night a unique, noire-ish atmosphere that sets it aside from most games, the melancholy undercurrent of the game providing an alternative to quick shocks and cheap thrills.