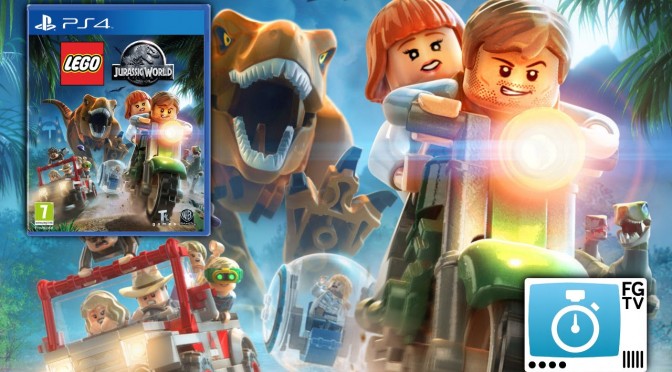 1. Genre
Lego Jurassic World is a new entry in the popular series of Lego adaptations of existing franchises. Like the others, it’s an action-adventure game with themed levels, objectives, and enemies, and players can collect and play as many different characters from the franchise.

As in the other Lego games, players solve puzzles, fight enemies, destroy environments to collect studs, build new objects out of piles of Lego they come across, and explore to collect characters and hidden objects.

New in this game, players can collect and customize dinosaurs to then use in the hub world and to progress the story.

A local co-op mode allows two people to play through the adventure together on a divided screen.

Other recent games in the Lego series include Lego Batman 3: Beyond Gotham and Lego The Hobbit. There is also a Jurassic World expansion pack planned for upcoming toys-to-life game Lego Dimensions.

3.Developer
As with other Lego adaptations of existing franchises, Lego Jurassic World was developed by Traveller’s Tales.

4. Format
Lego Jurassic World is available for PC, PS4, Xbox One, Wii U, PS3, Xbox 360, Vita, and 3DS. With no online multiplayer, there’s no need to have a subscription to PlayStation Plus or Xbox Live.

5. Duration and Difficulty
With 20 levels and a free-play mode, the game should keep players occupied for a long time.

As with the other Lego games, when characters “die” they just collapse into a pile of Lego bricks and soon reappear. Any difficulty in the game will come from working out how to solve the puzzles.

6. UK Rating
In the UK and Europe, PEGI rates Lego Jurassic World as only appropriate for those aged 7 and older for “non realistic looking violence towards fantasy characters – violence that is set in a cartoon, slapstick or child like setting that could be upsetting to very young children” and “pictures or sounds likely to be scary to young children”.
http://www.pegi.info/en/index/global_id/505/?searchString=lego+jurassic+world&send=Search

7. Other Ratings
In the US, the ESRB rates Lego Jurassic World E for Everyone 10+ (http://www.esrb.org/ratings/ratings_guide.jsp), with content descriptors for Cartoon Violence and Crude Humor. The description details the cartoon violence: “Players use punches, kicks, and firearms to cause damage in battle; combat is highlighted by impact sounds and cries of pain.” Examples of crude humour include “characters searching through large piles of dinosaur droppings, accompanied by comical remarks (e.g., “I was wondering where I dropped my ice pop. Uh, I’ll let you keep it” and “But when we drive back, I’m putting a tarp down on your seat.”).”
http://www.esrb.org/ratings/synopsis.jsp?Certificate=33941&Title=LEGO%20Jurassic%20World

8. Themes
Some young players may find the dinosaurs scary, as in the films on which the game is based. Beyond this, it’s a story about learning to work with wild animals, not just de-clawing them.

9. Why people play:
People play the Lego games for their humour and simple but enjoyable mechanics, particularly for the satisfying feeling of destroying objects in the game’s environments and collecting the Studs.

Some players may skip Jurassic World as they wait for Lego Dimensions, but as with the other Lego games based on other franchises, fans of the Jurassic Park films will particularly enjoy this game.