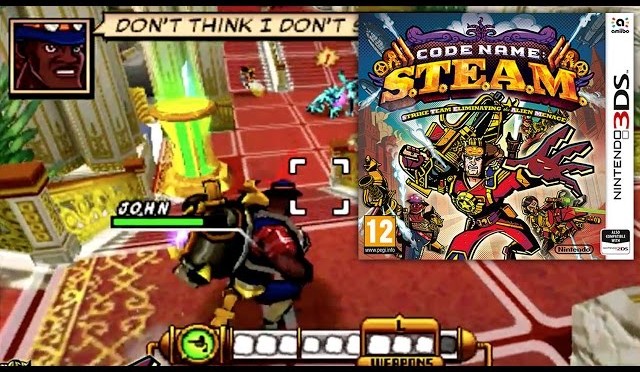 Code Name: S.T.E.A.M. is a turn based strategy game set in a cartoon steampunk version of London. Players control a squad of four steam powered super soldiers in turn based battles against opposing teams of aliens.

There are 12 characters to unlock, such as Tom Sawyer and Tiger Lily, each with their own special ability and equipped with a fixed primary weapon. Secondary weapons and steam tanks are also available to customise your squad for a particular battle.

Each squad member is controlled independently, with actions and movement limited by the number of steam points you have. The camera is fixed over the shoulder third person style, which lends a feel of real-time freedom with turn based moves.

Three multiplayer modes can be played locally or online. Death match is a thirty turn team based free for all, Medal mode gives players five turns to find the most medals hidden in the environment, while A.B.E. battle places you in first-person as a steam powered presidential robot with steam-powered shooting and melee attacks.

Scan in Marth, Ike, Lucina, and Robin “Super Smash” amiibos from the Fire Emblem series grants access to their character in the game.

Although not based on an actual comic book, the plot of Code Name: S.T.E.A.M. is presented as if it’s taken straight from the pages of a real comic, complete with panels, text bubbles and floating word sound effects.

Code Name: S.T.E.A.M. is developed by Intelligent Systems, the developers of the Fire Emblem and Advanced Wars series.

Players can expect to get a challenging 15+ hours of gameplay from Code Name: S.T.E.A.M., with the varied multi-player modes adding unlimited replayability to the game. Levels can be replayed on harder difficulty and to find all the hidden cogs, but even on easy it is a considerable challenge.

In the US, the ESRB rates Code Name: S.T.E.A.M. for a Teens audience (https://www.esrb.org/ratings/synopsis.jsp?Certificate=33280&Title=Code%20Name%3A%20S.T.E.A.M&searchkeyword=code%20name), with content descriptors for Blood, Fantasy Violence and Mild Suggestive Themes.

Combat is highlighted by explosions, cries of pain, and brief bursts of red blood. Some levels allow players to shoot from turrets or tanks in more frenetic combat. Female figures are occasionally depicted in revealing outfits (e.g., low-cut tops); one figure is depicted on a “victory” screen each time the player wins a skirmish.

Lobby group Common Sense Media believes the game is suitable for ages 13 and up, stating that parents need to know that Code Name S.T.E.A.M. is a steampunk-themed turn-based strategy game with moderate violence.

Code Name: S.T.E.A.M. is a combat game, but unusual in its start-stop turn-based battles. This gives players more time to consider their actions and any implications. When a character dies the loss is keenly felt, both tactically and emotionally.

The overarching theme of an alternate steam powered London raises themes of utopia and the double edged sword of investing too much hope in technology. The ebbing away of a player’s steam resource mirrors the depletion of fuel from the wider world. The thought of a world with limited fuel may unsettle some, but equally offers an interesting conversation point.

The strategic pre-game planning and chess-like thinking ahead of turn-based battles will be the main draw for players of Code Name: S.T.E.A.M., but the wacky comic book style and alternate reality steampunk setting is sure to appeal to a broad range of players.

The additional amiibo support will attract those keen to leverage their figurine collection, although this will require the possession of the slightly obscure Fire Emblem characters rather than more popular Mario and Luigi toys figures.

However, throw in a varied selection of fictional characters, such as The Wizard of Oz’s Cowardly Lion, HP Lovecraft’s Randolph Carter or Mark Twain’s Tom Sawyer and you have the recipe for literary-fueled bizarre, but surprisingly appealing, game.